Beto O’Rourke goes from “Hell yes, we are going to take your AR-15″ to “I’m not interested in taking anything from anyone.” 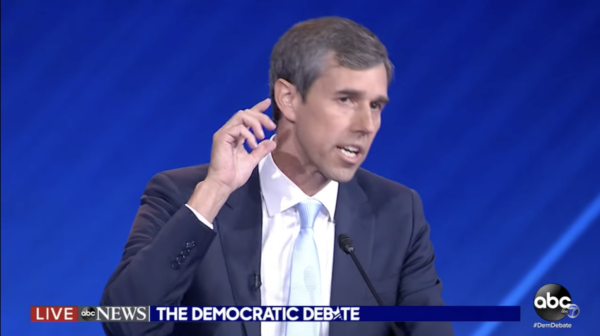 In 2019, O’Rouke made news with his claim at a Democratic presidential debate that “Hell yes, we are going to take your AR-15.″ Yet, in his current run to be the governor of Texas, headlines are saying “Democratic candidate backpedals on guns.” He is now positioning himself as a candidate who will defend the Second Amendment.

Speaking to reporters, O’Rourke also took a question about his controversial stance on guns and remarks made in 2019 about taking away AR-15s and AK-47s.

“I’m not interested in taking anything from anyone. What I want to make sure that what we do is defend the Second Amendment,” he said.

The question is whether people believe anything that O’Rourke is now claiming his views are or whether he says what he thinks is necessary to win an election.

UPDATE: The Houston Chronicle has endorsed O’Rourke for governor in the Democrat primary in a few weeks, and they have an editorial dismissing any concerns that O’Rourke may have flip-flopped on the gun issue.

We asked about challenges he’s facing on the campaign trail this time around, how much, for instance, his infamous quote, “hell yes, we’re going to take your AR-15” is still ringing in the ears of gun owners who might otherwise be inclined to vote for him but have the false impression that he doesn’t support Second Amendment rights.

“It’ll be an issue for some people, no two ways about it,” he said. “And yes, there will be folks who will come up, and they may have gotten a message from Greg Abbott that says that I want to take away everything that they own, including the butter knife.”

And he answered them, before a national audience and political opponents who will never let him forget it.

But he told us it gives him an opportunity to explain why he made that bold declaration in one of the presidential debates: “Look, I don’t know how you all would have reacted if 23 people in your community were slaughtered. If you were there, the day it happened and met the family members in the ICU waiting room who said, ‘why in the world, Beto, does somebody need a weapon like this in our community? And why were we as Hispanics hunted down for the color of our skin or ethnicity or country of national origin? And what are you, Beto, gonna do about that?’ Those are serious questions.”

We leave it to others to judge whether they believe that O’Rourke is really a defender of people’s right to self-defense or whether his past campaign statements were really made in the heat of the moment — though he repeated them frequently after that. Is someone who just a few years ago was talking about banning semi-auto rifles someone who no longer wants to do that? But wanting to buy semi-auto guns isn’t remotely similar to the absurd notion of banning butter knives.

← On Sunday Morning Newsmakers with Larry Marino on Los Angeles’ 870 AM: How well does the media cover gun crime stories? On St. Louis’ Larry Conner Show: Did increased gun sales cause the increase in violent crime? →