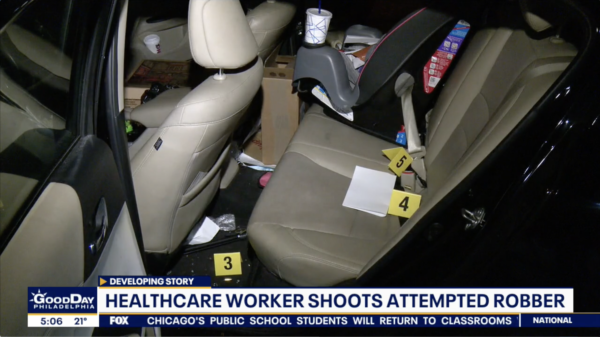 Reporter Steve Keeley: An 18-year-old shows up and points a gun, taps a gun muzzle on the window of the car. What he doesn’t know is what a lot of robbers and carjackers are finding out, that a lot more people these days are going to get a permit to carry a concealed weapon because of the crime situation that is out of control, particularly in Philadelphia.

From Fox 29 Philadelphia: Police say a driver turned the tables on an armed carjacking suspect in North Philadelphia Monday night when he shot the suspect multiple times with a firearm he was licensed to carry. Officials said a 32-year-old healthcare worker pulled up in front of a home on the 1700 block of West Folsom Street, Monday night, just before midnight. He was in possession of a valid license-to-carry and pulled a firearm, shooting at the 18-year-old through his window and striking the 18-year-old.

← On the Michigan Talk Network:With the death of Build Back Better, came the rebirth of the assault of voting rights On Cincinnati's WKRC: On How The SCOTUS Will Soon Be Deciding On the New York Concealed Carry Case That Will Likely Impact Gun-Control Laws Across The Nation And More... →