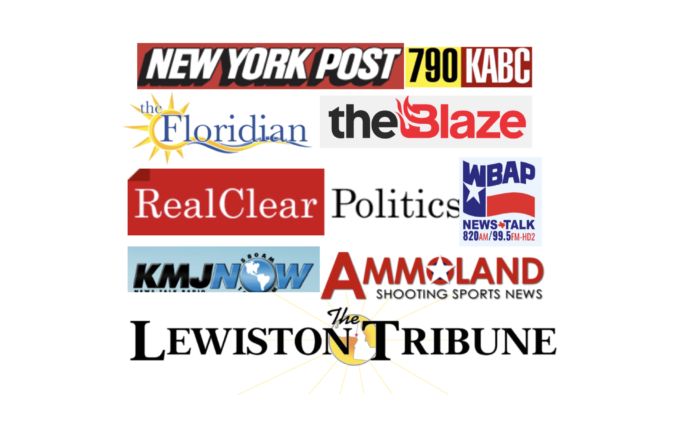 CPRC in the News: New York Post, The Blaze, The Floridian, Real Clear Politics, and more

While Democrats are “warning anew of racist voter ‘suppression,’ . . . democracies in Europe and elsewhere tell a different story — of the benefits of stricter voter-ID requirements after hard lessons learned,” reports John R. Lott Jr. at RealClearInvestigations. “Of 47 nations surveyed in Europe — a place where, on other matters, American progressives often look to with envy — all but one country requires a government-issued photo voter ID to vote.” The rule holds elsewhere, too: After massive fraud stole the 1988 presidential election from a left-wing challenger, “Mexico in 1991 mandated voter photo IDs with biometric information, banned absentee ballots and required in-person voter registration” — and voter turnout rose.

A recent survey conducted by the Crime Prevention Research Centerfound that election integrity measures such as voter photo ID requirements — which now are referred to as the “new Jim Crow” by progressives in America — are broadly accepted by democratic governments globally.

In fact, a whopping 46 of 47 European democracies require a government-issued photo ID in order to vote, and the one exception — the United Kingdom — is on its way to becoming the 47th, according to CPRC Director John R. Lott Jr., who summarized the organization’s findings in an article for RealClearInvestigations on Tuesday.

Beyond that, 33 of 37 member nations of the Organization for Economic Co-operation and Development also require photo IDs to vote. Only the U.K., Japan, New Zealand, and Australia do not. . . .

Phil Shiver, “Democrats label voter ID laws evil and racist but ignore the fact that 46 of 47 European democracies have them,” The Blaze, June 1, 2021.

A recent survey conducted by the Crime Prevention Research Center found that election integrity measures such as Voter ID are commonly accepted in democracies around the world, including 46 out of 47 European countries.

Not only do these countries favor them, but they are mandated in order to vote, and the United Kingdom is on its way to becoming the 47th country to follow suit.

Though it’s strange that p\Progressives in the U.S., who otherwise look to European countries for political inspiration, refuse to recognize what is obvious even to the liberal societies across the Atlantic — that voter photo ID requirements are prudent — it’s not necessarily surprising.

In terms of approval in the United States, a Rasmussen poll published in March shows that 75% of Americans support voter ID laws, up from the 67% in 2018.

The poll doesn’t only include Republicans, but 77% of independents and 60% of Democrats subscribe to the use of Voter ID as well. . . .

Voter Photo IDs Are the Rule in Europe and Elsewhere. John R. Lott Jr. reports for RealClearInvestigations that democracies across the pond have instituted strict voting regimes driven by hard lessons of fraud.

“If you’re primarily disarming the most law-abiding good citizens who obey the law, you make it easier for criminals to go and commit crimes,” said John Lott, a former adviser to the Trump administration who wrote the book, “More Guns, Less Crime.”

He added that “You have had the biggest spikes in the areas where police are not being allowed to do their job either because of orders or because of changes in budgets. It’s not really shocking to me that you see the increase.”

Last year, John Lott, who was hired by the Justice Department as senior adviser, published a study concluding that “there were 70,000 to 79,000 ‘excess’ votes in Georgia and Pennsylvania,” that tipped those elections to President Joe Biden, according to PJ Media on May 21.

This result is consistent with the notion that GBPs primarily target low-risk firearms that are more likely to deter crime than be used in the commission of a crime (Kuhn et al. 2002) and with the hypothesis that some criminals may be emboldened by their perception that victims will be less likely to defend themselves with deadly physical force (Lott 1998). . . .

It is consistent with the research of Dr. John Lott, which associates less restrictive gun laws with a small reduction of violent crime. . . .