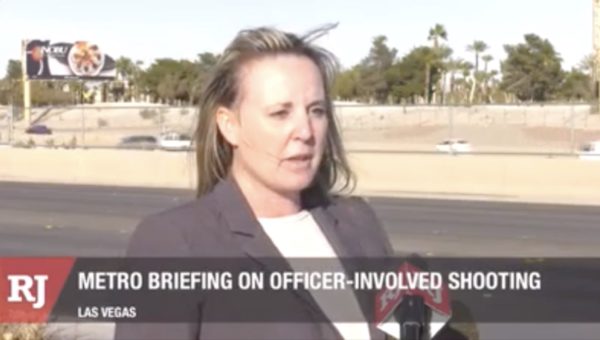 “I would like to take a moment to remind everyone the dangers of this job, of being a police officer,” said a representative for LVMPD during a press briefing from the scene, “and to thank good citizens that step up and help us in our time of need.”

One officer and three people shot at a suspect who stabbed another officer with a screwdriver. The attacker was fatally shot. The stabbed officer was taken to University Medical Center and she was reported to be in stable condition.

“He went into the business and started messing around with property that did not belong to him, and they asked him to leave,” she said.

Several people followed the man outside of the range as they waited for Metro officers to arrive. Investigators believe they were “ensuring that he didn’t re-enter,” Prosser said. . . .

“As they attempted to have more verbal contact with him, he pulled out a screwdriver and violently attacked one of our officers,” Prosser said. “At that time, three citizens as well as her partner officer fired multiple rounds, striking the subject.”