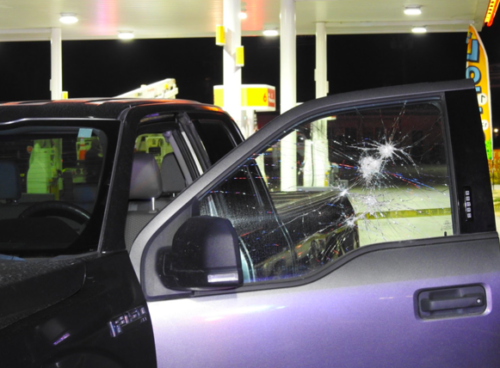 The shooting occurred on the evening of Jan. 6 when an armed, out-of-area man tried to rob a local man who was parked at the gas station. However, the local man, whose name is still being withheld, was carrying a permitted concealed weapon and returned fire. Both men were wounded in the gun fight but the robber, whose name is also still being withheld by law enforcement, died at the scene.

The call came in before 6 a.m. Thursday at an apartment complex on Selena Drive, located not far from Thompson Lane in South Nashville.

According to police, the man was sitting in his Nissan Rogue as it was warming up when two men got in the car. One of them hit him in the head before they ran off in different directions.

Police say one of the suspects fired a shot at the victim as he was running away. The car owner, who was also armed, shot back at him. No one was hit.

Police say the victim has a proper gun permit.

Multiple officers responded to the Burger King located in the 2800-block of Bragg Boulevard at Elm Street on Monday morning around 9:43 a.m. after a shooting occurred there, according to police…

According to Metro Police, the victim was approached by three men on Lemont Drive in Madison near Maplewood Lane. The suspects pulled a gun on the man and attempted to rob him, but that’s when the victim revealed he was also armed.

The victim shot at the men robbing him, and they fled the scene. At least one was struck by a bullet.

A man who fatally shot an armed man during a road rage confrontation in University Place will not face criminal charges, the Pierce County Prosecutor’s Office said Monday…

Investigators said Williams, 48, was recklessly driving a Chevy Silverado downhill on Chambers Creek Road and passed several vehicles before abruptly stopping in the middle of the two-lane road.

Williams got out of his truck holding a gun, sheriff’s spokesman Ed Troyer has said.

Two men in a Dodge Ram truck were behind the Silverado and forced to stop when Williams got out of his truck.

The passenger in the Dodge got out of the truck with his own gun.

After a verbal confrontation, Williams was shot.

A robbery victim was justified in shooting and killing a 27-year-old Bethlehem man who committed armed robberies at a strip mall Thursday night, the Lehigh County district attorney’s office said…

A beverage facility employee who was a victim in the first robbery confronted Mussa inside the pizza shop while Mussa was committing the second robbery, the DA’s office said.

Mussa turned and pointed a gun at the beverage facility employee, the DA’s office said.

The beverage facility employee, who was armed with a lawfully-possessed semi-automatic pistol, shot Mussa when Mussa pointed the gun at him as Mussa was turning and about to flee from Drake’s, the DA’s office said…

Police say a man chased four people after he yelled at them at Rusty’s Bar Thursday night.

The group tried to leave and get in their car and that’s when, investigators say, Lesniak chased after them…

That’s when Rossi pulled out his gun, fired several shots into the back of Lesniak’s truck and held him at gunpoint until police arrived…

The man who chased after the group now faces felony charges.