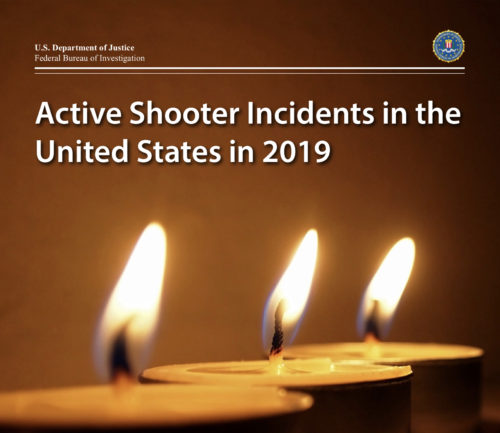 By contrast, the FBI claims that there were only 9 out of 145 cases (6.2%) where a civilian used a permitted concealed handgun to stop an attack. There 6.2% was statistically significantly different from the 15.4% at the 1% level for a two-tailed z-test. The FBI reports keep excluding cases where mass public shootings have been stopped by concealed handgun permit holders. It hardly seems random that the FBI seemed to systematically miss these cases.

Wearing body armor and toting an AR-15 semi-automatic rifle and a 9 mm handgun — along with several magazines for each — Timothy O’Brien Smith opened fire on Cline and others just before 3 a.m. at Ed’s Car Wash on Indian Creek Valley Road in Melcroft, Saltlick Township, District Attorney Rich Bower said. . . .

Smith, 28, remained on life support in a local hospital with a gunshot wound to the head, possibly self-inflicted, Bower said.

The suspect in a weekend shooting that killed four people at a Fayette County car wash was pronounced dead Sunday evening, state police confirmed Tuesday. . . . The sister of one of the women who was shot and killed told Pittsburgh’s Action News 4 reporter Beau Berman her sister’s ex-boyfriend was the shooter. She also said her sister had broken up with him and he was heartbroken and jealous.

Incorrectly describing a case where a civilian used a permitted concealed handgun to stop an attack.

Kroger Grocery Store (Commerce) On October 24, 2018, at 3:00 p.m., Gregory Alan Bush, 51, armed with a handgun, began shooting inside a Kroger grocery store in Jeffersontown, Kentucky. After fatally shooting a man inside the store, the shooter exited and fatally shot a woman in the parking lot. A citizen possessing permit confronted the shooter, but no gun re was exchanged. A second citizen possessing a valid firearms permit exchanged gun re with the shooter, but neither was struck. Two people were killed; none were wounded. The shooter fled the scene and was apprehended by law enforcement a short time later at another location.

Multiple news media outlets reported that shots were fired by the permit and that the permit holder stopped the attack.

While in the parking lot, a citizen who possessed a concealed carry permit engaged with the suspect, according to Jeffersontown police.

“Multiple rounds were fired by both the suspect and the intervening citizen,” Jeffersontown police wrote in a statement. “Neither the suspect nor the involved citizen, nor any other bystanders injured with this exchange of gunfire.”

The police chief clarified that no one was injured during the back-and-forth shooting – the woman killed in the parking lot was shot by the suspect before the exchange began, Rogers said. . . .

In addition to the two cases listed in the FBI report where permit holders stopped an attack, there were three missing cases.

“He is a hero,” Adams said. “He took action. I really think more people could have been shot… he saved us all.”

A wild rampage at a Walmart in Tumwater, Washington was stopped when three concealed handgun permit holders confronted and killed the attacker. The attacker had carjacked a vehicle that he drove to the Walmart. Once there, the attacker stole ammunition and then went out of the store, continuing to shoot at people. He unsuccessfully tried to carjack another vehicle, seriously wounding the driver. When he attempted to carjack a second car, two armed customers shot dead the attacker.

According to the local Fox affiliate and Fox News, the man who killed the attacker is a pastor with five kids who was out with his family.

A shooting at a back to school event for children and their families had a shooting that was quickly stopped by a concealed handgun permit holder. Something between 150 and 200 people (video here puts it at over 200), primarily children, were present at the event.

From Fox 32 WOFL in Orlando, Florida.

Titusville Police still have not released the name of the man who stopped the shooter at a park on Saturday, but they are calling him a hero.

The gunshots still echo across social media, after the emcee at Titusville’s Peace in the City event posted a Facebook live video of the shooting. When a good Samaritan carrying a licensed concealed weapon shot the attacker, police say he did the right thing.

“Based on the information that we’ve gathered,” said Titusville Police Sgt. William Amos.  “This person stepped in and saved a lot of people’s lives.” . . .

Here is another statement from the Titusville Police via the Orlando Sentinel on the evening of August 6th, 2018.

Titusville Police are calling the bystander who shot a gunman who opened fire at a park full of kids on Saturday a “hero.” On Monday, police said they aren’t releasing the names of those involved and said the citizen who returned fire on the suspect won’t be facing charges.

“He’s a hero,” Titusville Police Sgt. Bill Amos said. “This park was filled with families and children and, at that time, it was an active shooter situation for him and he was trained enough to deal with it and he did.” . . .

“He’s my hero,” he said. “Because I can only imagine how it would’ve went if he wasn’t armed. We might not be here having this interview.” . . .

— Markus Washington, an employee at the McDonalds’, to WAFF Channel 48 News

From WBRC Channel 6 in Birmingham, Alabama has this note:

The motive of the attacker isn’t clear. While it is possible that robbery was the motive, the fact that the attacker immediately began firing his gun as soon as he entered the restaurant means it is very likely that his goal was most likely just to kill people.

West Freeway Church of Christ (House of Worship)
On December 29, 2019, at approximately 11:50 a.m., Keith Thomas Kinnunen, 43, armed with a shotgun, began shooting inside the West Freeway Church of Christ in White Settlement, Texas. Though not a congregant, the shooter was known to church members. Two people (armed members of the church’s volunteer security team) were killed; two were wounded (from injuries incidental to the shooting). The shooter was killed at the scene by an armed citizen who led the security team.

There were two parishioners who were murdered in the attack. The FBI report claims that both the people murdered were “Law Enforcement/Security Personnel” (“Two members of the security team were killed before they had the chance to engage the shooter” p. 6). This was explicitly not listed in the citizens engagement section. Dr. John Lott talked to Jack Wilson, a church member who stopped the attack ((817) 781-7365), and he indicated that only one of the two parishioners, Richard White, had a concealed handgun permit and armed. Anton Wallace did not have a permit and was not armed. These were not security professionals, just members of the church who were designated as security personnel as a kind of honorary title.

At the time of the attack, Jack Wilson said that there were 19 to 20 members of the congregation and were armed. While they encouraged church members to carry permitted concealed handguns, it was not a job for members and they did not monitor who was carrying.

In addition to the one case listed in the FBI report where civilian permit holders stopped an attack, there were three missing cases. None of the cases in the “Citizen Engagement and Casualties” section mentions instances where concealed handgun permit stopped an attack.

A shooting at a dentist office in Colonial Heights, Tennessee was stopped by Larry Seagroves, a concealed handgun permit holder. After the killer, Harry Weaver, fatally shot one person, Kelly Weaver, his wife, he turned his gun on other people in the office. One of them, a dental hygienist, Sabrina Steal, said: “then he raised a gun to shoot me” (see video). Larry Seagroves shot the killer, wounding him before he could shoot these other people. After the attack, Harry Weaver told the police: “You all wouldn’t be dealing with me right now if the hero hadn’t stepped in.”

WJHL TV Channel 11 in Johnson City, Tennessee reports: “It was just a horrific situation that police said could have possibly been even worse if a patient at that dentist office didn’t take action. We are talking about a man identified as Larry Seagroves, a man with a carry permit.”

Sullivan County Sheriff Jeff Cassidy said: “He was a concealed carry permit holder and I’m going to call him a hero today.”

The court hearing reported in the video took place on March 22, 2019. Information is available here.

An employee who wasn’t even scheduled to work that day, but was simply hanging around the bar outside in the parking lot, stopped an attack that the police say would have likely resulted in multiple deaths. Note in the cover picture for this video that the bar has multiple gun free zone signs. From Fox 5 in Atlanta:

Deputies in Coweta County say an armed off-duty employee may have stopped a mass shooting at a crowded bar in Newnan Saturday morning.

FOX 5 News has the exclusive surveillance video of the shooting outside Fat Boys Bar and Grill on Highway 16. Deputies say that video shows Kevintez Mathewis on his way into the bar with a handgun when Ben McCoy confronts him and is shot multiple times. He drew the gunman’s attention and then drew his fire. . . .

From Channel 11 News in Atlanta:

McCoy heard the shots and grabbed his gun. Investigators reportedly said that Matthewis fired several rounds at McCoy. “He put his life on the line to try and protect the bar that he loves,” bar manager Emily McGhin said.

There was a shooting at a Walmart parking lot in Duncan, Oklahoma that left two people murdered.

Other active shooter cases that we believe that the FBI reports missed.

Active shooter cases are similar to the definition of mass public shootings with the exception is that they also include instances where guns are fired and no one is even injured, so we make no claim that we have found all case or even tried to find them.

A few non-mass public shooting cases that we believe the FBI reports for 2018 and 2019 miss include:

If these additional cases are included, for the period from 2014 to 2019, there were 25 cases out of 162 (15.4%) where people with permitted concealed handguns stopped the attacks.