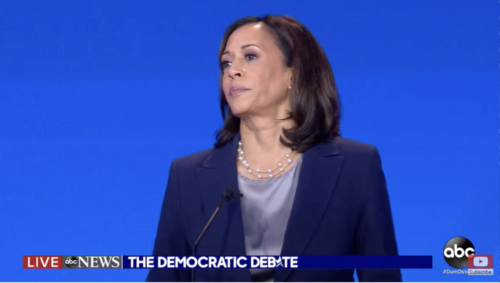 Kamala Harris explains that she believes that the president has the power to ban guns using Executive Orders. She also blames President Trump for creating the atmosphere that has lead to mass public shootings.

MUIR: President Obama, after Sandy Hook, more than 23 executive actions, and yet here we all are today.

Does the vice president have a point there?

BIDEN: Let’s be constitutional. We’ve got a Constitution.

And the idea that we would wait for this Congress, which has just done nothing, to act, is just — it is overlooking the fact that every day in America, our babies are going to school to have drills, elementary, middle and high school students, where they are learning about how they have to hide in a closet or crouch in a corner if there is a mass shooter roaming the hallways of their school.

I was talking about this at one of my town halls, and — and this child who was eight years old, probably, came up to me — it was like it was a secret between the two of us, and he tugged on my jacket and he said, “I had to have one of those drills.”

It is traumatizing our children. El Paso — and, Beto, God love you for standing so courageously in the midst of that tragedy. You know, people asked me…

… in El Paso — they said, you know, because I have a long-standing record on this issue. They said, “Well, do you think Trump is responsible for what happened?”

And I said, “Well, look, I mean, obviously, he didn’t pull the trigger, but he’s certainly been tweeting out the ammunition.”

← At the Missoulian: This election will determine future of private gun ownership in US On Point of View: Discussing "Gun Control Myths" →