Detroit Police Chief James Craig talked to Tucker Carlson on Fox News about why Detroit hasn’t had the riots that other cities have seen.

I am just ecstatic over the men and women in the Detroit Police Department. One thing I learned from my time in Los Angeles: We don’t retreat here in Detroit. We’re just not gonna do it. You saw the images, Tucker, of streets where there was lawlessness, looting, burning, no sign of police officers. We weren’t giving up ground to the radicals. We just didn’t do it.

I saw what it was like after Rodney King in Los Angeles and not only just that but Detroiters are fed up with these radical protests. I’m not to talking about the peaceful protesters, I’m talking about that core group — these misguided radicals that have tried to incite violence in our city. They said, ‘We’re not going to put up with it.’ And so we got a couple of things. We got a great police department, great leadership, but we have a community that stands with us and by us and said, ‘enough is enough.’

Craig then went on to talk about the reactions to three officer involved shootings in Detroit and how he had handled them. 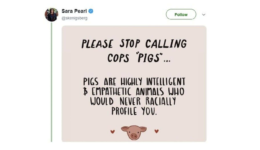 At Townhall: How the Media Created a Society That Accepts Refusing Service to Police Officers