A review of “Gun Control Myths” at Townhall: Anti-Gunners Will Hate This New Book On Gun Control 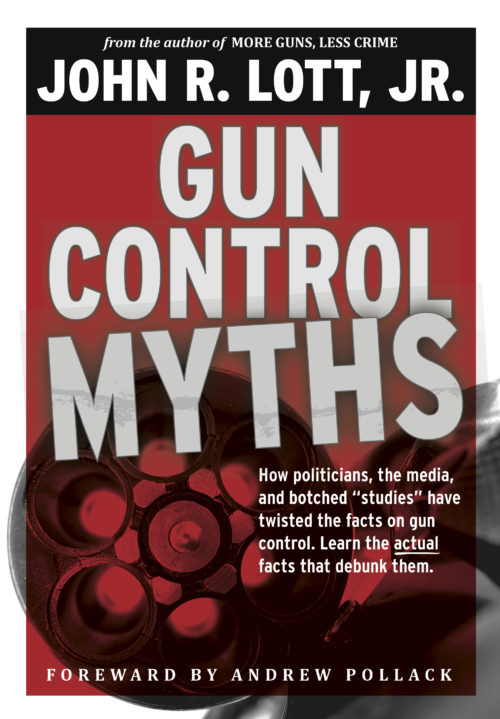 To get straight to the point, Dr. John Lott, formerly of the U.S. Sentencing Commission and now of the Crime Prevention Research Center, is the most important gun control researcher in the world, he has been for a long time, and he has just released a new book that is “must reading” for anyone who wants to be prepared to debate the hottest gun control issues before us today.

The book is “Gun Control Myths,” aptly subtitled “how politicians, the media, and botched ‘studies’ have twisted the facts on gun control.” While it’s true that most die-hard supporters and opponents of the right to keep and bear arms have made up their minds and will never change, book or no book, it is also true that “swing” or “independent” voters will decide the presidential election and several other crucial elections this year, and they may be receptive to having important issues explained to them in a straightforward way. That’s where Dr. Lott’s book may be one of those things that we need, right when we need it.

Lott hits the issues that most people who follow the gun control debate know about, such as the demand by Joe Biden and other Democrats to ban semi-automatic rifles. Lest anyone think there is such a thing as a moderate Democrat when it comes to banning guns, Lott reminds us, “Of the 19 Democrat presidential candidates that were still running as of October 2019, every single one supported bans on assault weapons and high-capacity magazines. They were also united in their support for red-flag laws that would allow people’s guns to be taken away without a hearing.” He adds, “most, but not all, of the nineteen candidates support requiring a license to own a gun,” a stepping stone to gun confiscation that President Lyndon B. Johnson tried to have included in the Gun Control Act of 1968 and which Democrats have wanted ever since.

But Lott also delves deeper, showing the irrelevance of a gun-ban to the problem the Democrats pretend they want to solve: mass shootings. As he has done for many years, Lott also shows that most mass shootings occur in locations where the possession of firearms is prohibited by law or corporate policy. Because the mainstream media almost never report instances in which mass shootings or other crimes are thwarted by private citizens carrying concealed handguns, Lott fills that gap as well, detailing two dozen such representative instances the mainstream media pretend never occurred.

Lott spends considerable time addressing what is perhaps the Democrats’ most insidious anti-gun scheme: morphing the firearm background check system into a national registry of guns and gun owners. Since November 1998, a computerized background check has been required on anyone purchasing a gun from a retailer. Anti-gun activist groups initially opposed the requirement, because they instead wanted handgun purchases delayed with a waiting period. Several years earlier, one of the groups explained how a waiting period fit into its grand strategy, saying, “The first problem is to slow down the increasing number of handguns being produced and sold in this country. The second problem is to get handguns registered. And the final problem is to make the possession of all handguns and all handgun ammunition . . . totally illegal.”

However, anti-gun groups now want checks on anyone who buys any gun from anybody, anywhere, and they want the FBI to keep records on those checks indefinitely. If that happened and the records included the make, model, and serial number of guns purchased, they would achieve gun registration over time, as people who owned guns before the law was changed sold or passed their guns along to their heirs. As Lott explains, gun control advocates oppose anything that would prevent gun registration, such as allowing gun dealers to destroy serial number records after a reasonable amount of time.

Lott decimates the leftwing Vox website’s claim, previously made by President Barack Obama, that America has a “unique” problem when it comes to criminal misuse of guns. He notes, for example, “There are many countries that have higher gun homicide rates that the United States, but simply don’t report the data.” But Lott dug until he found the data, which showed “Among countries that don’t release firearm homicide data, their combined homicide rate is 11.1 per 100,000 (population),” which is almost double the U.S. rate.

Lott further notes, “Murder isn’t a nationwide problem in the United States; there are vast swathes of the country that don’t experience any murders. It’s only a big problem in certain urban ar­eas. In 2014, the worst 2 percent of counties accounted for 52 percent of the murders.”

As the saying goes, “follow the money,” and Lott does precisely that. He notes that

Michael Bloomberg, the multi-billionaire former mayor of New York City, momentary 2020 Democrat presidential candidate, and bankroller of the euphemistically-named anti-gun activist group Everytown for Gun Safety, “spent $110 million on U.S. House elections in 2018 and at least as much on state legislative races that year.” As a result, Democrats took the House and swept to power in Virginia, where they almost set off the second American revolution by initially threatening to ban guns.

There might have been a time when we would have been surprised at what Lott reveals in the fifth chapter of his book. But given the FBI’s role in the apparent conspiracy of the Obama administration, Hillary Clinton’s presidential campaign, and various three-letter agencies to undermine President Trump, nothing surprises us much anymore. In any event, Lott explains how “During the Obama administration, the FBI issued false reports to the media in order to advance the gun control agenda.” In particular, Lott notes the FBI’s 2018 assertion that during the period they studied, only 5% of mass shootings were stopped by someone with a gun, and that mass shootings more than doubled from 2000-2009 to 2010-2018. . . .

The rest of the piece is available here: Mark Overstreet, “Anti-Gunners Will Hate This New Book On Gun Control,” Townhall, July 20, 2020.