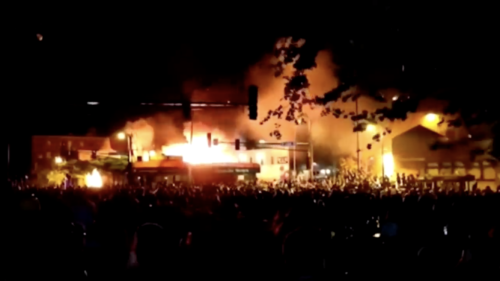 As rioting rampages through the Twin Cities in Minnesota, black store owners have had to themselves protect their stores. Some have tried with their bare hands, while others have used guns. For those who oppose private gun ownership, these riots show the need From the Wall Street Journal:

Minneapolis police have similarly taken a hands-off approach to this week’s rioting, which has destroyed roughly 130 local businesses, but the anger shows no sign of letting up. Downtown business owners—even those who stand against police brutality—have been fighting off looters with their bare hands. Some have taken up arms in defense of their establishments.

A local man posted a video to Snapchat Thursday showing four armed men guarding a stretch of black-owned businesses near where the riots were taking place. One of the men in the clip appeared to be wearing body armor and could be seen holding a Vector SDP, a gun the size of a small rifle that fires handgun caliber bullets. Two of the men in the clip appeared to hold AR-style pistols. The fourth man held an AK-style pistol at the high-ready position. A voice on the video could be heard warning looters to “run up in here and see what happens.”

Early Friday morning, as fires raged along the Lake Street corridor, the African-American owners of GM Tobacco told me they were armed and ready to protect their business—and that they stand in solidarity with those who seek justice for Floyd.

“This our home, this is where we live, this is where we shop,” one the men in front of the tobacco store said. “Our problem is they could have took it to the Capitol, could have took it to different places, but they took it here.” From the sidewalk in front of the tobacco shop I could see Minneapolis’s Third Police Precinct, which rioters set on fire.

“Why are you attacking small businesses and family owned businesses?” one of the men in front of the tobacco store said. “Why are you doing that if you have a problem with the police? We feel the same way that you feel.”

← At Real Clear Politics: U.S. COVID-19 Death Toll Is Inflated On Lock N Load Radio: From Gun Cases before the Supreme Court to the Coronavirus →