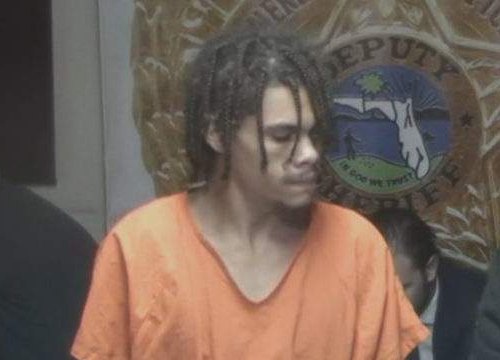 Police said Carter followed the victim outside after the victim finished eating and then punched the victim from behind in the parking lot of a nearby Popeyes, causing the victim to fall to the ground….

Cellphone video taken by a witness shows a good Samaritan, who identified herself to Local 10 News only as Lula, firing her gun during the incident in an effort to stop the attack….

Police said Lula warned Carter to stop beating on the victim or she would shoot him, but he ignored her.

According to police, a pizza delivery driver turned the tables on some would-be robbers by pulling out his own weapon and trading shots with them in Nicholasville….Police said an adult and a minor attempted to rob the Domino’s driver at gunpoint when the driver pulled out his own gun. . . .

Officers found the 24-year-old victim with two gunshot wounds to his legs. The victim told police that he had just arrived at a nearby home when two men walked up to him. Both of the men had weapons pointed at him and then demanded money, authorities stated.

The victim, who holds a CCW permit, drew his gun, and that’s when police say multiple shots were fired by the robbers and the victim.The would-be robbers fled the scene before police arrived. The victim was transported to Akron General Medical Center by EMS.

The Polk County Sheriff’s Office is now investigating the shooting, but says the woman with the gun is not facing any charges.

“She is legally allowed to own that firearm. She’s protecting her private business and her family members. He’s the one who has committed the felony battery. So, he’s got a warrant for felony battery, he’s also got a warrant for assault for threatening to come back and kill her,” said Carrie Horstman with the Polk County Sheriff’s Office….

“This suspect, Marcus Allen, he’s 23 years old, drove over to these people’s business. He knows them, they know him and he started beating on one of the victims and in fear for her husband’s safety the woman pulled out a gun and warned them to leave them alone,” said Horstman. . .

second male suspect appeared, who may have been hiding in a closet or restroom, Gonzalez said. The second male was allegedly partially masked, wearing gloves and armed with a baseball bat.

Police said the manager claimed the second man attacked her with a bat, and she was forced to defend herself.

“She did retrieve a weapon that she had on her person and fired, striking the male,” Gonzalez said. “The male has been confirmed deceased at the scene.”

Police say a group plotted to set up and rob a young man of expensive hair extensions, but they didn’t count on the man being licensed to carry….

The 23-year-old was selling expensive hair extensions and police say he was lured by two women via text messages before the attempted robbery.

“Omar literally jumps in the front window of the driver’s side window, which was down, and is on top of the victim forcing a handgun into his stomach and demanding all of the property that the victim had brought with him,” Paparo said.

In a panic, the victim pulled his own weapon.

“He lawfully is in possession of a firearm. He pulls his own firearm and fires three rounds, the first of which hits Mr. Thompson in the head and kills him,” Paparo said….“The DA’s Office has reviewed the case in reference to the victim and has determined this is a justifiable homicide,” Paparo said. . .

Roosevelt Rappley entered the Dayton-area store, produced a firearm and starting demanding money. One of the store clerks was a concealed carry permit holder and was legally armed. Once the suspect pointed his weapon at this clerk, he drew his own weapon and fired, striking the subject in the chest.

Rappley returned fire, hitting no one, before stumbling outside and collapsing. He was pronounced dead at the scene. . . .

Channel 2’s Audrey Washington learned that a fight broke out between a customer, Jeremiah Furlow, possibly another customer and the employee, neither of which has been identified.

The employee was detained and taken for questioning but will not be charged, police said….The manager said she knows the Subway employee and feels he did whatever he could to protect himself . . .

According to Assistant District Attorney Donna Berkey, a man and his son were at a business on Texas 105 near Chrystal Forest Drive when they heard glass breaking around 2 a.m. Wednesday….

According to information from the DA’s office, a business owner, regardless of whether they are licensed to carry, is in lawful possession of a gun because of the castle doctrine. The castle doctrine is an exception to a rule in place in some jurisdictions that requires a defendant to retreat before using deadly force in self-defense. The castle exception states that if a defendant is in his home or business he is not required to retreat prior to using deadly force in self-defense. . . .

Police say 50-year-old Theodore Scoville walked into the store swinging dangerously close to the owner with a two-foot blade, and the owner shot him.

“He had a sword beneath a poncho, it seems to be without saying a word, he pulled the sword out, swung it three times — at least three times — at a very close distance to the person behind the counter,” said Lt. Det. Kevin Beyrer with the Suffolk County police.

Officials said the incident does not appear to be a robbery attempt and the store owner’s gun was legal. He is not expected to be charged. . . .

Police said 22-year-old Jontae Alexander tried to rob a person at gunpoint on Rhodes Avenue at about 10:30 p.m. Sunday. The victim pulled out a gun and shot Alexander, who died at the hospital.

Police say as of right now no charges will be pressed against the man who shot Alexander.

It shows two masked men entering the store Wednesday shortly after 6:30 pm. They had guns. A customer and sales associate at the counter. The customer forced to the ground. That’s when the owner opened fire. Then the shootout.

The owner of the store was in a back room watching the events unfold on a security camera. He waited for the customer to get out of the way. Then he fired a shot. The suspects returned fire. And one of the bullets hit a door hinge. The owner was very lucky that he wasn’t hit. . . .

Two cousins robbed a girl and her father at gunpoint when the four met up to sell a phone in Salt Lake City on Saturday. Then, the father pulled out his own gun and fired at the cousins as they ran away, jail records show….

The girl’s father will not face charges, according to Unified Police Sgt. Melody Gray….

The girl and her father withdrew the agreed-upon amount in cash from an ATM, then drove to the address the seller had provided about 6:15 p.m., according to a police affidavit. But when they knocked on the door, there was no answer.

As they returned to their car, two males approached them, brandishing a knife and gun. The two demanded the money, as well as a phone that was sitting on the center console of the father’s car, jail records show. The girl and her father handed over the money and phone, and the pair fled.

As the two ran away, the girl’s father pulled out his own gun and fired three rounds at them because he “was in fear for others’ lives, knowing they had a gun,” according to jail records. . .

LeBrun said that Bua, in a white Hyundai, drove past the victim, in a black SUV, and cut him off near Magnolia Road. Both drivers then exited their vehicles to confront each other, which escalated into a physical altercation.

During the fight, the victim, a retired police officer, with a valid Nassau County pistol permit, fired one round from his firearm striking the other man in the buttocks.

They say a 26-year-old man walked into the store just before 1 a.m. and tried to rob it.

Police say the 34-year-old employee pulled out a gun and fired at the attempted robber multiple times, hitting him.

Officials tell News 12 that the firearm the employee used was his licensed gun. The suspect was taken to St. Barnabas Hospital in critical but stable condition. . . .