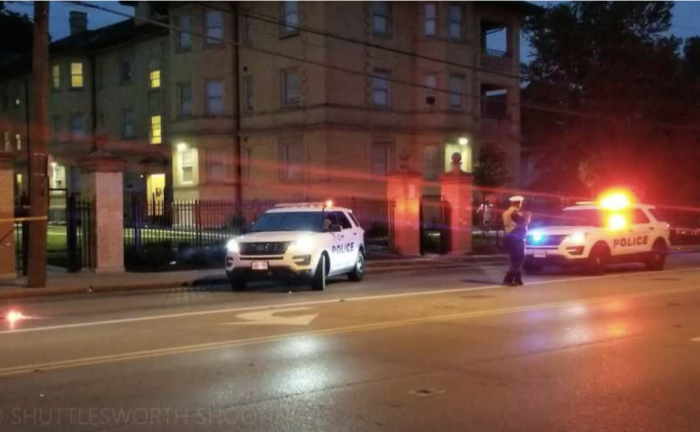 We haven’t updated these cases for a while (we have been working on other projects, such as Nikki’s new book), but will hopefully be returning to this soon. Here are cases of people legally carrying guns and stopping crimes outside of their homes.

A botched robbery this weekend left one teen dead and a second teen charged with murder – all while the robbery victim and police say the shooting was in self-defense.

Around 5 a.m. Saturday, investigators say two 15-year-old boys tried to rob a woman at gunpoint in the 3600 block of Reading Road.

The victim drew her own firearm and shot at the teens, striking 15-year-old Jordan Lara. He was taken to University of Cincinnati Medical Center where he died from his injuries.The actual shooter, the victim of the robbery, is not facing any charges. However, the surviving teen is. . . .

It was reported that a 30-year-old man was walking home from work and stopped in front of the Rookery while texting on his cellphone.

“Two male suspects approached [him] from behind,” deputies say. “One of the suspects threw [the victim] to the ground. Both suspects began to attack [him] during the attempted robbery.”

The victim then pulled out his handgun and shot at the men multiple times, deputies say. Freeman was hit by a bullet and taken to the hospital. . . .

It happened on Thursday night in North Port, Florida. Police say a woman was at the Suncoast Credit Union’s ATM, located at 4451 Aidan Lane, around 10:30 p.m.

They say that she got her money and was walking back to her car, where her boyfriend was waiting for her return.

Police say that’s when the suspect, who had a loaded handgun, walked up to the female victim.

They have since identified him as 19-year-old Ryan Warren of North Port, Florida. When boyfriend saw what was happening, he got out of his and shot the suspect multiple times.

The guy got away thanks to a nearby “getaway driver”….

Investigators said the Mahon’s came to the storage facility to check on a few of their units because they feared Hixson was stealing from them.

The Mahon’s told investigators that they and Hixson began arguing and that during this incident, Hixson allegedly began driving his golf cart around and struck Glynna Mahon and tried to run her over.

Lawrence Mahon, who has an open carry license and was armed, said he confronted Hixson. Mahon said Hixson got off the golf cart and charged at him, and that Mahon pulled out his weapon and shot Hixson several times. . . .

According to police, 26-year old Daniel Torres of Buckeye pointed a gun at the father, and told him to give him the money. Witnesses say Torres got distracted, turning toward the daughter who was nearby, and that’s when the father took action.

“He pulls to get the gun ready, the robber did turn back around, and that’s when my operator shot him,” said Herrman.

Police officials say a woman tried to pull the suspect into the getaway car, but she could not, so she left him and took off. Customers crowded the stand on the 4th of July, grateful the victims were alright.

“I’m just thankful we live in a state where the person was able to defend himself and his property,” said Nate Kinzie, who lives in Goodyear. “It’s terrible what actually happened.”….

A pistol-whipped and bloodied gas station clerk who shot and killed one of two robbers “is not facing any charges at this time,” the Broward Sheriff’s Office said Thursday. . . .

Security surveillance video showed two men approaching the store and once inside, one of them taking aim at the clerk with a gun.

The armed robber hit the clerk upside the head with a gun while the other one took cash from the register, said Veda Coleman-Wright, a sheriff’s spokeswoman. . . .

Few details about the case have been released, but the sheriff’s office confirmed Friday that no arrests have been made.

A man and his girlfriend were asleep in their tent when Smith entered it at approximately 2 a.m., according to the sheriff’s office.

From WAVY, Channel 10 in Norfolk, Virginia

The gunfire didn’t come from the robbers. Police confirmed a customer who legally had a gun confronted the suspects. He killed one suspect and injured another….

From the Epoch Times

“Concealed carry once again saved lives. I’m just glad the news is actually reporting on this. God bless the hero that saved the workers and customers’ lives,” someone else wrote. . . .

A nearby shop owner heard the commotion and rushed to stop the suspect as he left the restaurant, prompting a shootout between the store owner and the robber, police said.

The robber was able to make it to a car parked outside the restaurant and drive off with an unknown amount of cash, but detectives are not sure whether he was shot, Spencer said. . . .

According to police, 19-year-old Kenneth Cathey, approached and attempted to rob 25-year-old Tevin Kelly who was trying to withdraw money from the ATM.

Kelly tells police that Cathey approached him with a gun at the ATM and so Kelly shot him in self-defense.

According to police, Cathey was shot and ran a short distance in the parking lot and collapsed….

. . . The suspect parked a car behind the stand, approached the 24-year-old woman working on foot. The suspect told the woman he intended to rob the coffee stand, according to JPD.

At first, the employee thought it was a joke, according to a Facebook post by The Grind Coffee. But the suspect returned wearing a ski mask and wielding a wrench, according to the post and JPD.

The employee drew a firearm and fired a warning shot with a pistol into the air, according to JPD. . . .

Three men were taken into custody Thursday after trying to rob a man who turned out to be a concealed pistol license holder and crashing into a house while trying to get away from him, police said….

The men were trying to rob someone when they noticed the 49-year-old, police said. They tried to rob him, but he pulled out his gun and started to fire shots at them, according to authorities….

Metro Police say Jaylin Cummins was dressed in all black and his face was covered when he walked into Knock Out Wings on Jefferson Street.

According to investigators, he demanded cash at gunpoint.

Five employees were inside the restaurant. As one of the female employees dealt with Cummins, one of her co-workers saw an opportunity to retrieve a pistol being carried by another male employee, who had his hands up.

Cummins was shot and fled the restaurant without any money….

The investigation is ongoing but police said no charges were expected against the restaurant employee who shot Cummins. . . .

A local real estate agent survived an attack by a man she was showing an open house to in Commerce City. . . .

“At that point, we got into the master bedroom and he pulled a knife out,” she said.

Cornered in the master bedroom, Hetzler said the man laid out a knife and six-inch rope.

“He wanted me to take off my ring and go in the closet, and at that point, his intentions were deadly, in my opinion,” Hetzler said.

Fearing for her life, Hetzler drew her handgun that she is licensed to carry.

“As I drew my firearm, and he saw that I had that, he doused me with bear spray. At that point, I could not see. I could barely see. My skin was burning, my eyes were on fire and so I fired,” she said. . . .

Las Vegas police are investigating after they say a manager shot and killed an employee who reportedly punched him and hit him with a metal bar.

The manager has a concealed carry weapons (CCW) permit. Police believe the incident may be a self-defense shooting. . . .

Combs is accused of approaching the group of men as they were playing dice in the area, producing a weapon and firing shots, striking three victims. In return, one of the victims, a CPL holder, produced his firearm and fired it, striking Combs, police said. . . .

The victim was sitting in a vehicle with two people when two others approached them from behind on foot.

Police say one of those people approached the driver side of the vehicle, assaulted the victim with a gun and demanded items.

The victim, who holds a concealed weapons permit, had his handgun with him.

He fired his gun several times, and the man, believed to be in his 20s, fell to the ground. Medics pronounced him dead at the scene. His identity is not yet known. . . .

As the suspects, identified as 16-year-old Qwanterrius Stafford and 17-year-old Brenna Harris, turned to rob the store clerk, the customer pulled out his concealed weapon and shot the suspects, according to investigators. . . .

The customer, who had a legal permit to carry a concealed weapon, has not been charged. . . .

An employee told police that she was keeping an eye on the door when she noticed someone peek inside. A moment later, two armed men entered the business and demanded money. The witness pointed to the cash register and both suspects started collecting money.

That’s when the manager reportedly came from the back of the business firing. The suspects reportedly returned fire, striking the manager in the leg.

Two other employees said they were standing outside the business when the suspects initially ran up and pointed the weapons at them. They said the suspects told them to hand over their aprons. After complying the suspects pointed the gun in their direction and then pulled the trigger, sending bullets flying next to them….

Authorities told ABC13 the delivery driver was waiting on him to come out of the apartments when Nwadike came out of the shadows, pointed a gun and stole his wallet.

Prosecutors say that’s when the delivery driver, who has a concealed handgun license, drew his weapon from his holster on his right hip and started firing….

The driver only had the gun for protection….

Authorities say a 19-year-old man told investigators he was sitting in his car at a fuel pump with the driver’s side door open when a woman approached him in an effort to “divert his attention.” At the same time, the victim told police he saw a man moving toward his car with a knife in hand.

The unknown man, who police are calling a suspect, then approached the vehicle and allegedly demanded the 19-year-old give him the vehicle.

According to police, the victim drew his personal handgun and shot at the suspect with the knife….

On Friday, police said a business employee shot the teenager during the attempted robbery. The teen was transported to an area hospital with injuries that were not life-threatening. He was later taken into police custody. . . .