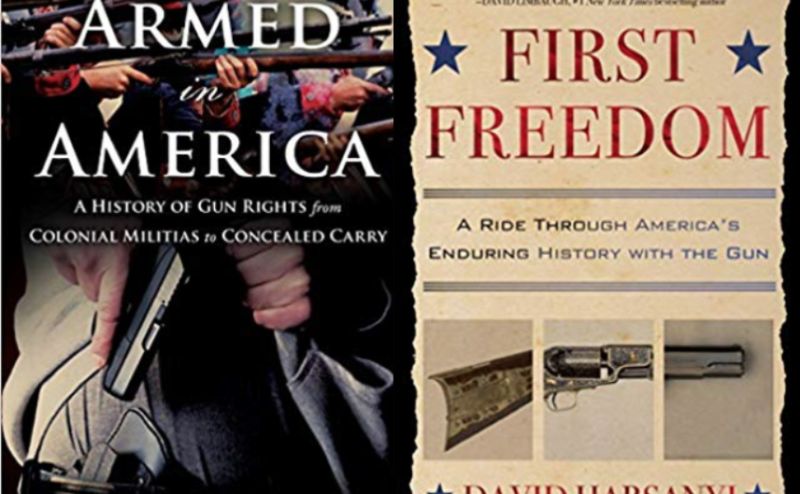 Two book reviews in the Claremont Review of Books: Way of the Gun

Dr. John Lott had a book review at Claremont Review of Books on Patrick Charles’ Armed in America and David Harsanyi’s First Freedom.

Charles’s approach is encapsulated by this claim: “The history of all laws and jurisprudence suffers from racism and prejudice. This is one of moral consequences of American history in general, and therefore is not limited to the subject matter of gun control.” Armed in America is an advocacy book that mixes interpretations of the Second Amendment with various assertions about gun control policy. For Charles, who has written a previous book on the Second Amendment, the “right of the people to keep and bear arms” really isn’t about letting people have guns for self-defense. Although the Second Amendment speaks of “the right of the people,” he interprets the phrase far more narrowly to mean “militiamen.” He calls it “patently absurd” that the British disarmament of Americans at Lexington and Concord inspired passage of the Second Amendment, but offers no more than an endnote that tells you to read another of his books. In fact, the Founding Fathers hoped to prevent such an attempted disarment from ever happening again.

His policy claims, too, are sloppy and filled with simple mistakes. Charles looks at surveys showing that people use guns defensively a couple million times a year and compares them with other surveys indicating that criminals use guns about 430,000 times—implying firearms are used to stop crime “five times” more frequently than they are used to commit crime. He thinks this means that crime is significantly underreported. But guns aren’t only used to stop criminals with guns. Criminals tend to target what appear to be physically weak victims, and those victims often use guns defensively against assailants who are not themselves carrying firearms.

Charles asserts that states put their citizens at risk when they allow them to carry concealed handguns without sufficient training, and again he provides no evidence to back up this claim. My research in More Guns, Less Crime (1998) finds no relationship between training requirements and rates of permit revocation. For firearms-related violations, permit holders face revocation rates of thousandths or tens of thousandths of 1%. Indeed, the revocation rate for permit holders is about one seventh of the conviction rate for firearm crimes among police.

Law-abiding citizens who obtain concealed handgun permits know that a lot is at stake if they misuse their gun, and often get training even if their states don’t mandate it. In states with so-called “constitutional carry” laws, people are armed in greater numbers now that they don’t have to go to the trouble and cost of obtaining permits. But data from at least two of these, Idaho and Kansas, show that despite switching from mandating training to not doing so, the number of people getting training has risen. Charles certainly wouldn’t have predicted that.

He dismisses as “pure speculation and completely unverifiable” former NRA president Sandra Froman’s 2006 statement that right-to-carry laws reduce violent crime. But he doesn’t know enough about the debate to realize that Froman was merely quoting estimates from empirical research that I did with David Mustard in the Journal of Legal Studies. Charles might not agree with that economic research and dozens of similar peer-reviewed published studies, but to accuse Froman of pure speculation is inaccurate and unfair.

He also attacks Stand Your Ground laws, which let’s people defend themselves without having to retreat as far as possible, but he appears to be unaware of the problems with justifiable homicide data. Very few police departments collect these figures, and passing a law focusing on justifiable homicides likely spurs some departments to begin monitoring these cases more carefully. Charles views an increase in justifiable homicides, where someone justifiably protects themself or another person from death or other significant harm, as a bad thing.

Many mistakes are minor but still irritating. The book erroneously claims that Florida was the first state to adopt a “shall issue” right-to-carry law in 1987, when in fact that there were already eight states with these laws. Indiana had adopted its law 60 years earlier. Charles describes Florida and the next 20 states as adopting the “NRA’s model ‘shall issue’ legislation.” But there is nothing really different between these states’ laws and the eight that were already on the books. For example, Pennsylvania’s was taken directly from Indiana’s.

I need to be upfront regarding Charles’ comments on my own research. “Lott’s scholarship,” he writes, “seems to be motivated by the longstanding belief within the gun-rights community that the government is coming to take their firearms.” He cites two of my books, but I never made that argument and I don’t know where he thinks I made it. The only time I come anywhere close is in my 2016 book, The War on Guns, when I discuss Hillary Clinton’s promise that, if elected, she would pick Supreme Court Justices who would overturn recent decisions lifting handgun bans in Washington, D.C., and Chicago. But my point was to prompt discussion about gun bans and other regulations.

By contrast, David Harsanyi’s First Freedom presents an entertaining history of the so-called Wild West, which wasn’t how it appears in the movies. (Bank robberies were actually rare.) A senior editor at The Federalist, Harsanyi explodes one myth after another about the history of guns. Gun control advocates have gone so far as to claim that “the lack of violence [in the old West] can be attributed to the fact that there was more gun control in the West than there is in modern America.” But cities in the old West didn’t actually ban guns. The “ban” in Dodge City amounted to little more than men “voluntarily” handing over guns in exchange for being able to get drinks. Any other gun regulations were nonexistent. “Not in the wildest recesses of the westerner’s imagination,” he explain, “would he think a person had to ask for permission—or to get a license—from the government to own a firearm.”

The book spends some time on the racist history of gun control, which continues to disproportionately disarm minorities, particularly poor ones who are more likely to be victims of violent crime. The same Democrats who assert that free voter I.D.s are an attempt to suppress black votes have no problem requiring government I.D.s and various fees for blacks to buy guns for protection. In Washington, D.C., it costs $125 for a background check to transfer a gun privately. In New York City, such checks typically cost $175 to $200. The result is that only the affluent can defend themselves. In 2013, when Colorado passed background checks on the private transfer of guns, all but two Democrats in the state House of Representatives voted against a Republican amendment to exempt impoverished individuals from a new tax on private transfers of guns.

In the United States in 2018, outside of California and New York, about 8.6% of adults have a concealed handgun permit. Over a third of permit holders are women, and about 13% are black. But in Los Angeles County, where elected Democrats decide who gets a permit, as of January 2017 there were 226 issued for almost 8 million adults. Only the political elite get them: judges, reserve deputy sheriffs, and a small group of very wealthy, well-connected individuals. As of 2012, Hispanics made up almost half the county, but they only got about 6.5% of the permits. Women got about 7%, and blacks 5%.

Regarding the well-known but widely misunderstood 1939 Supreme Court case United States v. Miller, Harsanyi points out that the case allowed the federal government to regulate sawed-off shotguns only because the military didn’t use such weapons. People were limited to the weapons used by the military. The implication is that the case appeared to confirm that there was a constitutional right for individuals to own guns.

My quibbles with First Freedom involve the author missing some literature that would help make his case. For example, while he discusses one of Joyce Lee Malcolm’s books, he misses her Guns and Violence (2002), which reports how murder rates in England fell after the introduction of guns. More on the impact that regulations have on people’s safety would have been interesting.

Whether unintentionally or not, the two books show something else: the gun debate is far from over. It isn’t the $110 million that Michael Bloomberg spent in 2018 just on races for the House of Representatives. With the U.S. Supreme Court again wading into the debate after granting cert to New York City’s bizarre regulations that limit licensed gun owners for where they can carry guns, we will be hearing the claims from both these sides again.

The book review is available here.