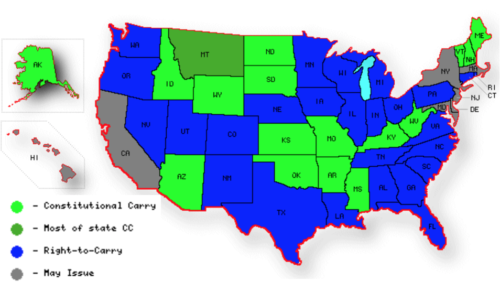 Yesterday Kentucky become the 17th state that allows people to carry concealed without a permit in all or virtually all the state. There are 16 states where no permit is required and Montana where a permit isn’t required in 99.4% of the state. As of 2018, over 11.38% of the adults in Kentucky had a concealed handgun permit. Eliminating the permitting requirement should increase the percent of the population that legally carries concealed even further.

Republican Governor Matt Bevin signed it into law on March 11th and the law will go into effect on July 1st. Now if Iowa, Nebraska, or Colorado were to change their law, it would then be possible to travel carrying a concealed handgun from West Virginia to Idaho without a permit.

Senate bill 150 eliminates the requirement of a concealed carry permit, though Kentuckians can still opt to get a permit if they wish to take advantage of reciprocity agreements with other states. The current permit fee in Kentucky is $60 for five years, so this change will make it easier for the poor to carry legally. There will now be 24 states that allow people to carry without a training requirement. The bill passed the Senate by a 29-8 vote and in the House by 60-37.

← CPRC in the News: CNN, lots of TV stations across the US, The Hill, Yahoo! News, Medpage Today, NewsBusters, and much more Television Show Bias on gun control: ABC's The Rookie makes civilians using guns to protect themselves as dangerous and bigoted →