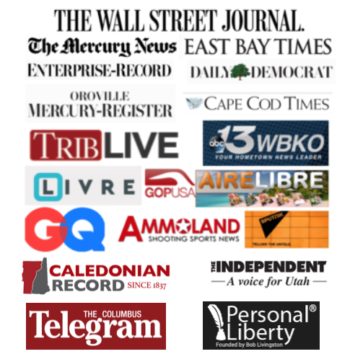 “There’s a whole host of reasonable regulations if you go to a gun store, but if you’re outside a gun store there are few if any regulations, at least at the federal level,” [David Chipman, with the Giffords Law Center to Prevent Gun Violence] said. The study, he added, “supports the notion that requiring people to go to gun stores makes it more difficult for them to get guns.”

But John Lott, an economist and president of the Crime Prevention Research Center who was on the United States Sentencing Commission in the 1980s, said the study bolsters his skepticism of gun restrictions.

Lott likens gun laws to alcohol prohibition and the “war on drugs,” which he notes did little to quench drinking and drug abuse while enriching black-market bootleggers and drug cartels. And he points to Mexico, which has some of the world’s strictest gun laws — Mexicans can only buy small-caliber firearms from a single, government-run seller — yet it is awash in violent crime.

“In Mexico there aren’t powerful guns to steal from citizens, yet the criminals still go and get guns,” Lott said. He argues that making legal purchases easier, as was done with drugs and alcohol, is more effective thwarting criminal cartels trafficking in contraband, whether liquor, drugs or guns. . . .

This problem [with the media] runs deeper than we seem to realize. The Washington Post recently devoted 5,000 words to a fake-news purveyor without noticing the significance of its own reporting: The guy running the site was a liberal who got his jollies (and made money) by inventing tall tales to titillate conservatives. In Alabama’s U.S. Senate race, we belatedly learn, a liberal tech billionaire funded the creation of fake conservative Facebook pages to influence conservative voters. Or read conservative scholar John Lott’s lengthy account of how Jonah Peretti, founder of BuzzFeed, the supposedly reputable news site, stole Mr. Lott’s identity and sent out fake emails in his name. . . . .

The question is no longer “should we arm teachers?” Now, it’s “how many armed teachers are already out there?” We flew down to Ohio to embed with the men and women behind FASTER Saves Lives, a group that has trained thousands of teachers from all across the country how to shoot to kill. . . .

Benner has poured himself into studying the macabre science of mass shootings, and after six years of practice, he can rattle off statistics about perpetrators as if he were listing the ages of his siblings. Ninety-eight percent of them act alone. Eighty percent use a long gun or shotgun. Seventy-five percent bring more than one gun, and 30 percent take their own lives at the end. (Benner says that he takes many of these figures from Breitbart and from the Crime Prevention Research Center, whose founder has published books entitled More Guns, Less Crime; The War on Guns: Arming Yourself Against Gun Control Lies; and The Bias Against Guns: Why Almost Everything You’ve Heard About Gun Control Is Wrong.) . . .

A recent study by the Crime Prevention Research Center in Arizona revealed that illegal immigrant crime rates were more than double the general population. . . .

According to the Crime Prevention Research Center, permits for women are increasing rapidly.

Austin says her license is a form of protection.

“Just the way life is now, life’s a little more dangerous sadly to say. Just in case you find yourself in an ugly situation where it may cost you your life,” Austin said. . . .

and the very informative book “More Guns, Less Crime” by John R. Lott Jr. These studies show that gun bans do not reduce crime but, to the contrary, encourage it. . . .

In the years before founding BuzzFeed, CEO Jonah Peretti masqueraded as political opponents or business rivals, creating fake websites and spreading false statements and emails pretending to be them in order to defame them, one of his victims told Sputnik Wednesday.

Peretti, whose news outlet has recently gotten into hot water after publishing and sticking with a story refuted by the Office of the Special Counsel, also has a history of knowingly spreading false information about others.

John Lott, president of the Crime Prevention Research Center and a specialist on civilian use of firearms, told Sputnik Wednesday that Peretti impersonated him in 2003 in the interests of whipping up support for a hotly debated gun control law.

At the time, Peretti was the director of the R&D lab at Eyebeam, a New York-based not-for-profit art and technology center.

Peretti adopted the identity of Lott, who authored the book “More Guns, Less Crime,” purporting to have had a change of heart and sending out emails urging recipients that he’d had a change of heart and to oppose the “Protection of Lawful Commerce in Arms Act,” which lawmakers intended to use to protect gun makers from lawsuits. A website Peretti created, AskJohnLott.org, carried the same message, Lott explained in a Tuesday op-ed on Fox News.

“[Peretti] set up a website using my picture and appearing to be from me, and as I described in the op-ed, he sent out emails that appeared to be from me and he emailed back and forth with people trying to convince them he was me,” Lott told Sputnik. . . .

Texas provides for the apprehension of a person believed to be dangerous, a timely evaluation of the person, and if necessary, the placement of that person in a mental health facility for treatment. The most relevant statutes provide for a non-warrant detention, a warrant detention, a protective custody order, and court-ordered mental health services. As John Lott pointed out, “If someone’s mental illness really does pose a danger to others, why only stop them from legally purchasing a gun? They’ll have plenty of time to obtain a weapon illegally. Our best bet is to confine them to a mental health facility.” (John Lott, “CPRC in Investor’s Business Daily: Some gun laws dealing with mental illness do more harm than good” Investor’s Business Daily, 9/26/15.) . . .

It should come as no surprise to law-abiding gun owners that there actually are reasons why we need to fight to keep the Left from further infringing on our right to keep and bear arms. But for those who need a primer on the historical purpose of the Second Amendment and its multiple purposes, recommend that they watch this video.

In in, Judge Andrew Napolitano interviews gun John Lott, a researcher with the Crime Prevention Research Center and author of “The War on Guns” and other books, about the importance of being able to defend yourself and your loved ones, as well as the fact that an armed populace adds a layer of protection against tyranny. . . .