CBS’ Bull (Season 3, episode 2) is about a woman who murdered a man who killed her child. According to the show, the woman who fatally shot this man found it the “easiest thing in the world” to legally buy a handgun in New York City.

First, one has to get a NYC handgun license, which is not only expensive (about $440); forms, reference letters, and a visit and interview by the NYPD; and it can take up to eight months to get the license. Once you get the license, you have to go through a background check again to buy the gun from a licensed gun dealer. The details are much more complicated than that, and you can get a more complete list of the details here. Even buying a gun from a private person requires a background check and that check can cost at least another $150.

The claim is thus obviously false, but gun control advocates can’t keep from pushing the notion that the ease of getting guns was associated with murder.

As one reader pointed out to us, the woman here also notes about buying the gun “Something I thought I would NEVER do.” Her shame is not in murdering the man, but rather she is ashamed that she bought a gun.

At the end of the show, the woman’s defense was that she killed the man because he had been found not guilty in the murder of her daughter and that he was threatening her other daughter’s safety. The defense resulted in a hung jury.

If you want to see other recent examples of television show media bias on guns see here. 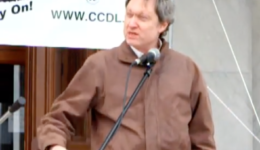