The downside of police being able to seize people’s guns 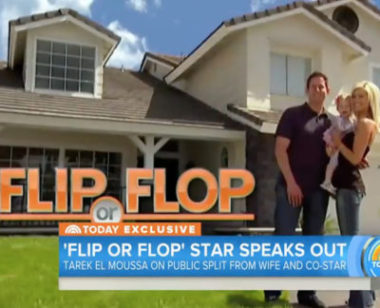 Tarek El Moussa and then-wife Christina separated following an incident in which she called the police to warn that her husband posed a risk with his gun.  Tarek, a concealed handgun permit holder, had taken his gun with him when he went hiking.  From the New York Post:

“Flip or Flop” star Tarek El Moussa insists he wasn’t suicidal when he stormed out of his family home with guns in May 2016.

During the incident, Tarek, 36, exited the family home he shared with wife Christina, who was reportedly in the house with contractor Gary Anderson, who she’d go on to date briefly after splitting from Tarek.

“That was a huge misunderstanding on her part, not my part,” Tarek told “Dr. Oz” on an episode airing Friday.  . . .

“I have a CCW, California Concealed Carry, which means I can legally carry a firearm. I live in the canyons, where there’s wildlife and bobcats and mountain lions, and I literally went on a hike,” he continued.

“The next thing I know, there’s a sheriff’s helicopter circling and I’m like, ‘Geez, what are these guys doing?’ and I’m like, ‘They must be looking for somebody bad,’” he recalled. “Then I realize, ‘Well, wait a minute he was looking for me!’ And next thing I know I see 11 [sheriff’s deputies] around me and off-road vehicles and guns on me. I’m like, ‘Wait, am I the guy? I think I’m the guy. What did I do?’ That’s what happened that day.” . . .