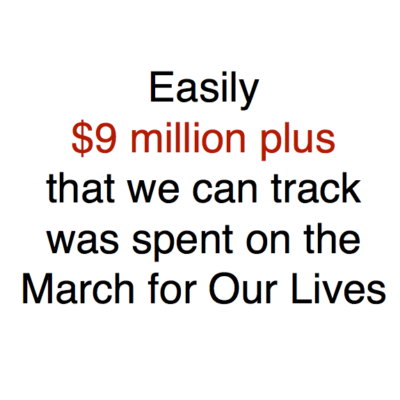 .For a rally that brought in 200,000 people, this was a pretty expensive event.  Easily $9 million that we know of was spent on the “March for Our Lives” event, but that is not counting in-kind help and much of the spending that didn’t go through the main organization.  An early estimate of $5 million from the main organization (the “March for Our Lives Action Fund”), $2.5 million in grants from Bloomberg’s Everytown (presumably much more from them in other ways), up to $1.5 million from Lyft, free hotel rooms and food, and for many people free air travel.

Of course, this estimate doesn’t include everything that was spent on the march.  It only counts the money spent directly the organization technically linked to the students.  It doesn’t cover all the help given by groups such as Bloomberg’s Everytown.  Note it was also an “early” estimate.  From NPR:

Organizers of the “March For Our Lives” rally in Washington put the early cost estimate for the event at $5 million, and said they have “several million dollars” left to continue to push for stricter gun laws and fight gun violence. . . .

Some of the biggest contributors to the cause have been celebrities. Clooney and his wife, Amal, pledged $500,000, and Winfrey pledged to match that. Director Steven Spielberg and Hollywood producer Jeffrey Katzenberg also donated half a million dollars each.

Among the in-kind donations not included in the $5 million total was:

Many businesses and grassroots groups have pledged to support protesters by providing free food, lodging, and rides at the March for Our Lives rallies in Washington and other locations. Here is how they are trying to help the cause with discounts and giveaways to students and other demonstrators. . . .

The Shake Shack location at Union Station in Washington, D.C., is hosting a poster-making session on Friday, March 23, the day before the rally, from 3 p.m. to 5:30 p.m. Poster supplies will be available for free . . . .

The Eatwell DC restaurants, including The Bird, Logan Tavern, and The Pig, are handing out bag lunches for free from 10 a.m. to noon, while supplies last. Another distribution point for free bag lunches is Think Food Lab, the restaurant run by food activist and celebrity chef Jose Andres at 701 Pennsylvania Avenue. . . .

The New England Patriots are lending their plane to Saturday’s “March For Our Lives” event.  Owner Robert Kraft provided the team’s official plane to fly some of the students injured in the Parkland, Florida school shooting, as well as families of the victims, to Washington D.C. . . . .

One can only wonder how much all the free media coverage was worth in terms of advertising to get people to attend, such as the plugs at the Academy Awards Show.

Kimmel’s monologue worked best when he was sincere. Whether he was calling on speakers to say whatever they want — including a notable reference to the March for Our Lives event on March 24 — or taking note of the important shifts in Hollywood’s attention, it felt like he really wanted to pay heed to what’s going on in the world. Kimmel knew what that night meant to people, and he did his best to honor those who cared the most. . . .

NEW YORK – Everytown for Gun Safety today unveiled a $2.5 million nationwide grant program to support sibling marches inspired by the March for Our Lives movement on March 24. In the wake of the mass shooting at Marjory Stoneman Douglas High School – the deadliest school shooting since the mass shooting at Sandy Hook School in 2012 – students have banded together to lead marches in our nation’s capital and in communities around the country. They will demand that lawmakers make students’ lives and safety a priority and pass common-sense gun safety legislation.

By the way, the “March for Our Lives Action Fund” is actually run by adults, not the students.  Indeed, none of the board members even live in Florida, let alone Broward county where the students live.  The Huffington Post found:

A board that includes six volunteer directors is overseeing all March for Our Lives funds, a spokesperson for 42 West told HuffPost in an email. Decisions on how to spend the funds will be up to that board and a “student advisory board,” the spokesperson said. When asked what sort of oversight mechanisms are set up to ensure the money is going to the students’ desired reforms, the spokesperson said, “The board of directors will handle. . . .

The fund’s directors, according to the form, are George Kieffer, chair of the Board of Regents of the University of California; Jeri Rhodes, who is with the Friends Committee on National Legislation, a Washington-based lobbying group founded by Quakers; Aileen Adams; who served under former Los Angeles Mayor Antonio Villaraigosa; Nina Vinik, an attorney who has a background in gun violence prevention; Vernetta Walker from BoardSource, an organization that provides support for nonprofit leaders; and Melissa Scholz, an attorney who has expertise in nonprofit law. The fund is organized as a Delaware corporation and operates as a 501(c)(4) nonprofit.

The document lists Deena Katz, an Emmy-nominated producer and the co-executive director of the Women’s March Los Angeles Foundation, as president. She is helping organize the March for Our Lives on her own as an individual, a 42 West spokesperson said. . . .

← On TRT World: Will the push for more gun control actually do something to actually stop mass public shootings? On the Grant Stinchfield TV Show to discuss the Left's false claims about guns →