Spike in premeditated killing of police officers, changes in who is killing police 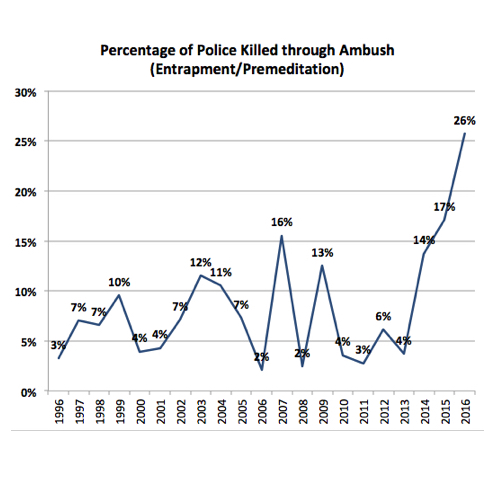 Over the last couple of decades, it is hard to see any particular pattern in the number of police officers who have been murdered in the line of duty, but the pattern for ambush killings, attacks that involved premeditation is a different story.  During the years from 20 years from 1996 to 2015, on average 8 percent of police officers who were murdered died in premeditated attacks.  In 2016, that percent went to 26%.  There is an increase in the percent murdered in ambushes over the last couple years.  The spike in the number of premeditated murders was even more dramatic.  The previous high number of ambush murders was 9 in 2007 and the average from 1996 to 2015 was only 3.95.  By contrast, in 2016, it rose to 17.

Something clearly unusual occurred in 2016.  Whether it occurred because of the Obama administration’s claims of systematic racial discrimination by police or some other cause isn’t clear. 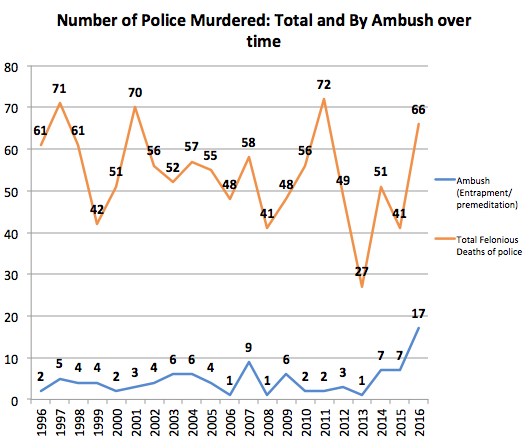 What is clear is that there was a very statistically significant increase in ambush killings of police officers in 2016, both in numbers and as a percentage of all police killings.  One concern is that this increase might have occurred because of increased racial tensions.  Evidence of this can be seen in the statistically significant high level of blacks killing officers through ambushes in 2016.  That year, 53% of those killing officers were blacks — that is much higher than other years at better than the 0.2% level for a two-tailed t-test. 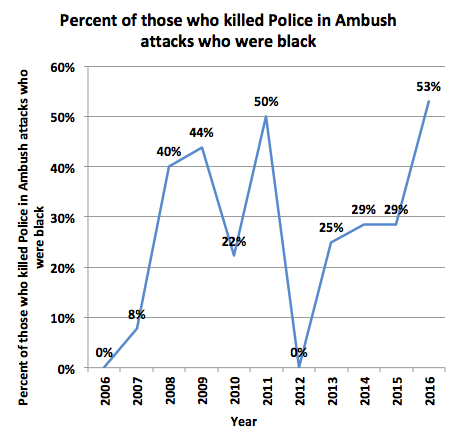 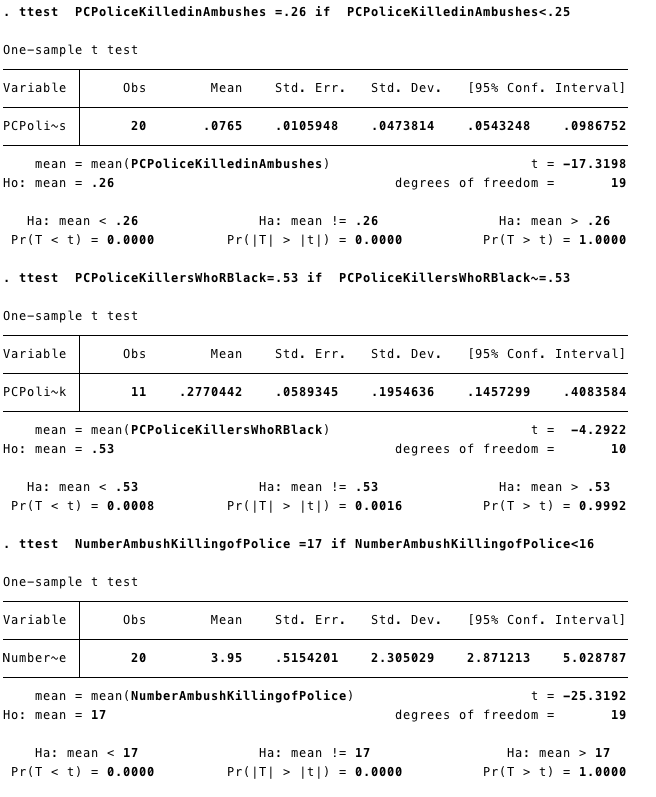 Data sources:  The data for the police death and the ambush police shooting have been gathered from FBI’s annual Law Enforcement Officers Killed and Assaulted (LEOKA) reports. In each annual report, it provides the yearly Law Enforcement Officers Feloniously Killed data, which covers duly sworn city, university and college, county, state, tribal, and federal law enforcement officers who died as a result of felonious incidents in the line of duty during the year. The Law Enforcement Officers Feloniously Killed data by type of weapon for each state and agency collects the data for the police death at the state level. Meanwhile, LEOKA also reported the police death data by Circumstance at Scene of Incident, including the ambush situations. There are more details provided for the state level ambush police shooting data in the summaries of officers feloniously killed by state.

State and Agency by Type of Weapon, 2016

← Problems with Siegel et al, American Journal of Public Health, "Easiness of Legal Access to Concealed Firearm Permits and Homicide Rates in the United States" At Fox News: "Here's why raising the gun possession age could cost some crime victims their lives" →