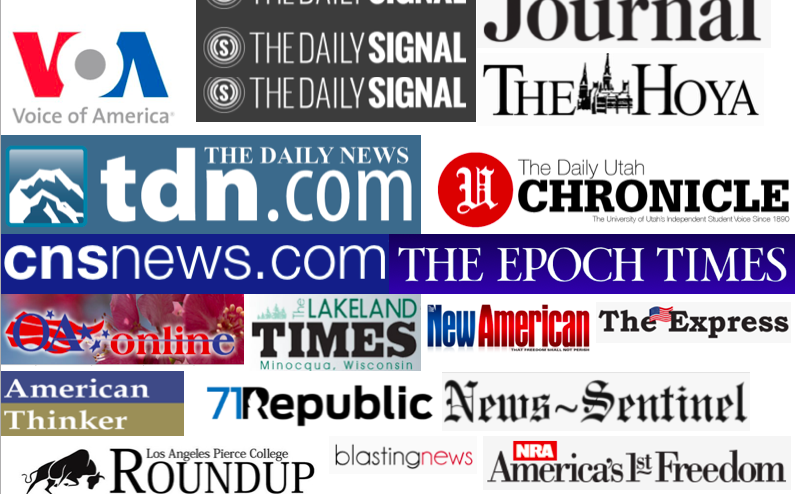 CPRC in the News: Voice of America, Daily Signal, Utah Chronicle, CNSNews, Odessa American, and others

Though the NRA has come on board, other gun rights advocates say treatment, not gun seizure, is the answer to dealing with gun owners who show signs of trouble.

“If you really believe somebody is a danger to themselves or others, then you ought to think about involuntarily committing them to some type of mental health facility,” said John Lott, an economist and founder of the right-leaning Crime Prevention Research Center. . . .

The Crime Prevention Research Center’s John Lott noted that between 1950 and 2015 only two mass shootings occurred outside “gun-free zones.” Another way to view these tragedies is 98 percent of mass shooting deaths are in “gun-free-zones.” . . .

Quoting professor John Lott, Ph.D., a well known gatherer of facts — not misinformation — I will attempt to pass on some truths that are lost in demonstrations by anti-gun people.

• 92% of all mass shootings, (defined as four or more persons killed) are committed in gun free zones

• More than half of the mass shooters were brought to the attention of the medical profession.

• More than half of the shooters used more than one gun instead of so called ‘high capacity” magazines. . .

“Prior to 1996, there was already a clear downward [trend] in firearm homicides, and this pattern continued after the buyback… It is hence difficult to link the decline to the buyback.”

In Britain’s case, the Crime Research Prevention Center found that after the gun ban was implemented, there was initially a severe increase in the homicide rate, followed by a gradual decline once Britain beefed up their police force. Yet, there has only been one year where the homicide rate was lower than it was pre-ban.

Furthermore, according to the same source, 99 percent of mass shootings in America have happened in gun-free zones. A mentally sick shooter’s goal is to be in a position to murder as many as possible, so they target areas where they’re least likely to find armed resistance, which happens to be gun-free zones. . . .

Twenty years ago economist John Lott, author of “More Guns, Less Crime,” and his research partner wrote: “We find that allowing citizens to carry concealed weapons deters violent crimes and it appears to produce no increase in accidental deaths. If those states which did not have right-to-carry concealed gun provisions had adopted them in 1992, approximately 1,570 murders; 4,177 rapes; and over 60,000 aggravated assaults would have been avoided yearly.” . . .

And to touch briefly on another proffered solution, gun crime expert John Lott is skeptical of the efficacy of posting uniformed armed guards.  Referring to the 2016 Pulse nightclub shooting, Lott notes (emphases added):

[W]hen a gunman killed 49 people and wounded 58 others – the police officer on guard was the first person who was shot at.  An officer’s uniform is like a neon sign saying “shoot me first.”

More than 96 percent of public mass shootings from 1998 to 2015occurred in gun-free zones, according to the Crime Prevention Research Center. This statistic suggests either mass shooters select gun-free zones intentionally or shooters are able to kill more people in a gun-free zone because no armed person can stop them. Allowing the Georgetown community to be armed would give students and staff the chance to stop a would-be mass shooter. . . .

The debate will include two participants: former Deputy Assistant Secretary of State Joel Rubin, who is now an adjunct faculty member at Carnegie Mellon University; and John Lott Jr., Fox News columnist and president of the newly formed Crime Prevention Research Center. The event is free for NMU students and $2 for the general public. . . .

Lott’s opinion pieces have appeared in “The New York Times,” “Wall Street Journal” and other major publications. He is the author of eight books, including “More Guns, Less Crime” and “Dumbing Down the Courts: How Politics Keeps the Smartest Judges Off the Bench.” Lott holds a doctorate in economics from UCLA. He has published more than 100 articles in academic journals and has held research and teaching positions at the University of Chicago, Yale University, Stanford, UCLA, Wharton and Rice. . . .

Murders in the United States are very concentrated. According to the Crime Prevention Research Center, over 50 percent of murders occur in 2 percent of the nation’s 3,142 counties. Moreover, gun-related homicides are heavily concentrated in certain neighborhoods within those counties: 54 percent of U.S. counties had zero murders in 2014. . . .

A study published by the Crime Prevention Research Center shows that France and Belgium, countries with much stricter gun control than the U.S., have a higher death rate per capita as a result of mass shootings than America does. . . .

Where do you live? Murders in the United States are very concentrated. According to the Crime Prevention Research Center, over 50 percent of murders occur in 2 percent of the nation’s 3,142 counties. Moreover, gun-related homicides are heavily concentrated in certain neighborhoods within those counties: 54 percent of U.S. counties had zero murders in 2014. . . .

As demagogues denounce the efforts made by Utah’s firearms manufacturers and distributers, evidence demonstrating the effectiveness of concealed carry courses has continued to accrue. “From 2007 to 2015, murder rates decreased by 12.5 percent and ‘overall violent crime fell by 18 percent.’ At the same time, ‘the percentage of adults with permits soared by 190 percent,’” read a study by the Crime Prevention Research Center. . . .

As criminologist John Lott says, “More guns mean less crime.” Across the United States, as laws were passed in most states legalizing concealed carry and the right to protect oneself with force, crime plummeted. . . .

Opponents of gun-free school zones point out that maintaining a full-time police presence at every school is costly. Four out of 10 public schools currently have an armed safety officer, according to John Lott, an economist and gun rights advocate.

But Lott says even one officer may not be enough since the uniform screams “shoot me first” to a would-be attacker.

“Concealed carry comes with the benefit that attackers won’t know who is armed, and won’t know who they need to attack first,” Lott wrote in an editorial for New York Daily News. . . .

Using carefully vetted statistics, the Crime Prevention Research Center reports that 98 percent of shootings not part of some other crime (like a bank robbery) where four or more people were killed have occurred in areas where general civilians are not allowed to have guns. . . .

“Prior to 1996, there was already a clear downward [trend] in firearm homicides, and this pattern continued after the buyback,” wrote Lott. “It is hence difficult to link the decline to the buyback.”

According to a report from the Crime Prevention Research Center, mass shootings have two unique aspects: most are in gun-free zones and most shooters have some kind of #Mental illness brought up during the investigation into the shooting. . . .

Additionally, McGrath concluded that it was widespread gun ownership that deterred criminality in these areas in which law enforcement had little authority or ability to handle crime.

In an article by The University of Chicago Press, John R. Lott Jr., a gun rights advocate, economics professor and author of More Guns, Less Crime explains why armed citizens are less likely to become victims.

“Concealed handgun laws reduce violent crime for two reasons,” Lott said. “First they reduce the number of attempted crimes because criminals are uncertain which potential victims can defend themselves. Second, victims who have guns are in a much better position to defend themselves.” . . .

Even if you discount the notion that pro-Second Amendment voices were not allowed to be heard, it’s more disturbing that, as researcher John Lott noted, the event does the exact opposite of what schools are supposed to do. Rather than teaching teens to consider multiple sides of an argument and think for themselves, the National School Walkout encouraged students to fall in line with one way of thinking. Students who didn’t support the gun control view were made to feel like outliers. . . .

John Lott, of the Crime Prevention Center, takes the case a little bit further. Rather than just pointing out that criminals don’t obey the laws—that’s why they are criminals, after all—and saying they’ll find a way to do their dastardly deeds regardless of words in the annals of state or federal law, Lott talks about the absurdity of leaving a whole class of young adults vulnerable to the whims of criminals. Notably among those whom politicians are now trying to arbitrarily disarm are college-age women.

Women are already at a natural size and strength disadvantage when it comes to fighting off a stalker or would-be rapist if they have to depend only on hand-to-hand fighting. That’s one of the primary reasons women choose to carry: they know a gun levels the playing field. . . .