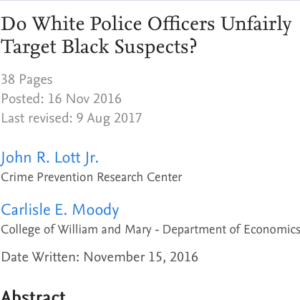 Revised our research on police shootings

We have worked hard to revise and expand our research on police shootings. We are proud of this research, and strongly recommend that people download it and read it.  The study is available here.

Using a unique new data set on police-involved homicides, we apply several discrimination tests to determine if white police officers discriminate against black suspects. We have data on a total of 2,699 fatal police killings for the years 2013 to 2015. This is 1,333 more killings by police than is provided by the FBI data on justifiable police homicides. We find that the probability of an unarmed black suspect being killed by a white police officer is significantly greater than the probability of a black suspect being killed by a black police officer. We also find that while black officers are generally more likely than white officers to kill unarmed black suspects at a higher rate than they kill unarmed white ones, the differences in these gaps for black and white officers are not statistically significant. These findings are inconsistent with taste-based discrimination on the part of white police officers.