At Fox News: Trump needs a chairman for his Council of Economic Advisers. When will Democrats let him be confirmed?

Dr. John Lott has a new piece at Fox News on the incredibly slow confirmation process for Trump’s nominees.  Because of the delays created by the Democrats, even if Trump had nominated people as quickly as past administrations, it wouldn’t have made any difference in the number of people confirmed.  The lack of staffing in the Council of Economic Advisers impacts everything from taxes to regulation to even crime issues that the Trump administration is trying to accomplish.  The piece starts this way:

It’s the middle of July, and President Trump still doesn’t have a chairman for his Council of Economic Advisers. His nominee, Kevin Hassett, is a world-recognized expert on taxation, but he has been stuck on the sidelines despite tax reform being one of the administration’s big goals this year.  He is the one person who could explain how the different parts of the tax bill fit together.

White House advisor Gary Cohn has reportedly told associates that time is running out for tax reform.  He worries that if tax reform doesn’t get done by the end of the year, it likely won’t happen at all.  Missing key players such as Hassett doesn’t help.

The delay reflects only Democrat’s unwillingness to confirm any Trump nominee.  Hassett is not a controversial pick.

According to organizations such as the AFL-CIO, the League of Conservation Voters, and Americans for Democratic Action, these Senators have perfect or near-perfect liberal voting records. Senator Elizabeth Warren (D-Mass.) was the only committee member who opposed Hassett.

It read, in part, as follows: “While the signers of this letter hold a range of views on President Trump’s policies, we all believe that the formulation of economic policy would be advanced by the analysis and advice that Dr. Hassett would bring to the table.”  They also noted Hassett’s “record of serious scholarship.”  The signers included all of President Obama’s Council Chairmen (Jason Furman, Alan Krueger, Christina Romer, Austan Goolsbee), President Clinton’s chairs (Laura Tyson, Martin Baily), Vice President Joe Biden’s chief economist Jared Bernstein, and Obama economic advisor Mark Zandi.

Going back to 1980, the average time to confirm a Council Chairman was 25 days. For incoming administrations such as Trump’s, which are already short-handed, the average confirmation period is 13 days, with the longest lasting 25 days.

Hassett’s confirmation stands at 76 days and counting.  For past incoming administrations, the chairman would have officially started his job by around February 26.

Not a single nomination to this position has ever taken anywhere near as long as Hassett’s. Some of the responsibility lies with the administration, but Democrats have done everything they can to slow down all of President Trump’s nominees.  Demanding cloture filings for every single nominee, no matter how uncontroversial, means two days of debate before cloture can even be voted on, and then an additional 30 hours after that. . . . 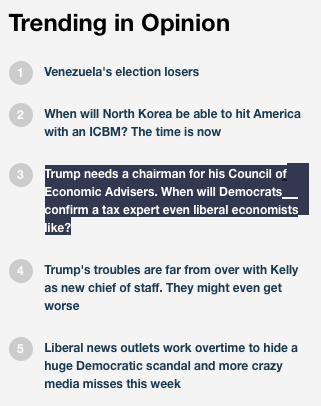 Regarding historic Democratic obstruction, at Fox News, former U.S. Sentencing Commission economist John R. Lott writes that “Democrats have done everything they can to slow down all of President Trump’s nominees,”highlighting the case of “non-controversial” nominee of Kevin Hassett to be CEA chair.