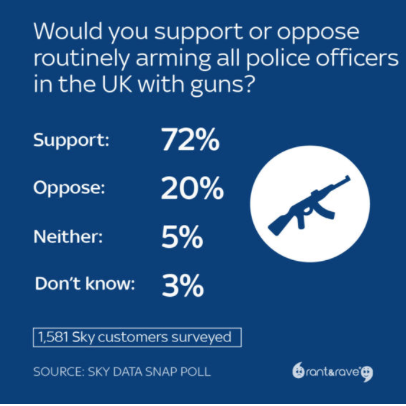 Views on guns might be changing in the UK

A new poll from Sky News finds that there is massive support for arming police with guns:

Some 72% of the public say police officers should be routinely armed, while 20% think the police should not carry guns as a matter of routine.

The views of police are also more generally favorable towards them being armed.

A poll of Metropolitan Police officers in February found that 44% think there should be more specialist firearms officers in their force, while 26% said police should be routinely armed.

Only 12% said they would not carry a firearm on duty under any circumstances. . . .

The UK Daily Mail had a review of an older book, A Brief History Of Crime, by Peter Hitchens, that shows that some were questioning the gun control regulations even before the recent terrorist attacks.

. . . People in this country get emotional about guns but refuse to think about them. They run, squawking, from the subject as though it were perfectly obvious that the best response to anything that goes ‘bang’ is to ban it.

Those who own or keep guns are treated as only slightly less repellent than child molesters. In a perfect example of this silly frenzy, a Doncaster college lecturer was sacked last January for allowing a student to bring a toy plastic gun into class for use in a photography project. . . .

One astonishing statistic shows just what a deterrent they can be. In Britain, roughly half of all burglaries take place while the householder is at home. In the United States, where the home-owner is likely to be armed, only one burglary in eight happens when there is someone at home. And in some states, which openly license residents to use deadly force against intruders, burglary is virtually unknown. . . .

Yet if this policy was supposed to stem the rise in armed crime, it has completely failed. A former senior police officer, Colin Greenwood, has studied this in detail and says, devastatingly: ‘There is no statistical relationship between the numbers of firearms legally held in Britain and the use of firearms in homicide or robbery.’. . .