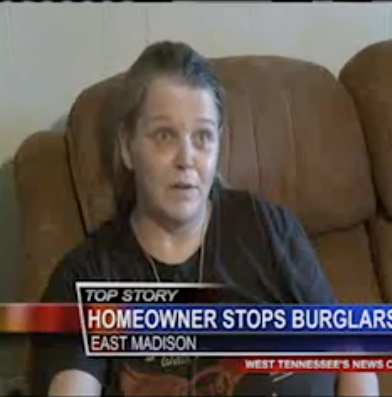 Beech Bluff, Tennessee — Elsie Lee was faced with five burglars who busted down her door.  By the way, suppose that this woman had to actually fight it out with these five men.  How many bullets might she wish that she had?  From WBBJ Channel 7 in Jackson, Tennessee on May 16, 2017.

“We were asleep, and I thought I had heard something but I wasn’t for sure,” Lee remembered. “I thought I was just dreaming something, and then I heard a big bang again.”

She knew something was not right.

“I got up and came running through the hallway and my gun was sitting on the dog cage, and the guy was standing in the kitchen. He had just busted my door open,” Lee said.

Lee then grabbed her .45-caliber handgun and her shotgun.

“I put the gun in his face and asked him if there was something I could do for him, and he was gone just that quick,” Lee said. “I chased him out the back door trying to look at the tag number on the car, something I could describe other than just him.” . . .