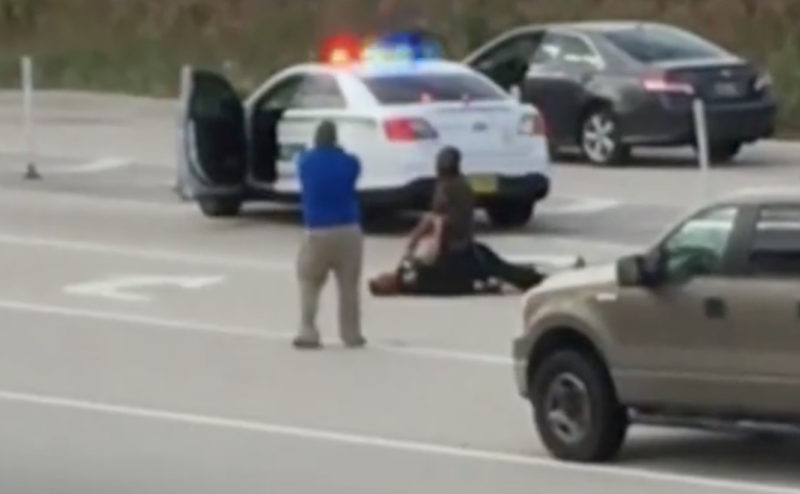 This video was obtained from KHQ Channel 6 television.

On March 15th, 2017, the Florida State Attorney’s Office released a video of Ashad Russell, a Florida resident with a concealed handgun permit, fatally shooting another man, Edward Strother, who was attacking a Lee County, Florida Sheriff Deputy Dean Bardes.  Prosecutors had cleared Russell of criminal charges on February 15th, 2017.  The shooting was found justified because the deputy’s life was determined to be in danger.  The case stems from an incident that occurred on November 15, 2016.  The Florida State Attorney’s Office just released cell phone video of the event.

Lee County Sheriff Mike Scott wrote this on his Facebook page the day after the attack:

Earlier this week, two heroes met on I-75 and while they had never met before, one would save the others life. I was at the hospital when the ambulance arrived, the rear doors opened, and my Deputy Dean Bardes was unloaded on a stretcher. Bloody from a vicious attack by a driver Bardes had stopped for endangering the lives of other innocent citizens in our community, the Medics wheeled him into a treatment room. Joined by others from our team, I was there when his wife and family arrived with fear and concern for their loved one as the E.R. team worked on him. Ironically, this was the first day in a while that Deputy Bardes was alone on patrol because as a Field Training Officer, he typically has a recruit riding with him to learn the business. A business that has seen an increasingly alarming rise in attacks and killings perpetrated on cops. A business that has fallen victim to false narratives like Ferguson where the good guys have been painted as the bad guys by a vocal minority that refuses to allow facts and evidence to get in their way. A business that is the last line of defense between good and evil.

On behalf of the men and women of the LCSO, I thank Deputy Dean Bardes for his bravery and pray for a full recovery. I thank the E.R. staff and E.M.S. for their immediate attention to Dean, and I thank the many witnesses to this event who stopped to assist our Detectives. I thank my good friends at “Shoot Straight” who realized that the hero’s gun was taken as evidence and immediately gave him a brand new firearm. Above all, I thank the hero that recognized the imminent threat, rushed to Deputy Bardes’ aid, and ultimately stopped that threat. In a day and age where race is a near instant focus for media and other pundits in police incidents, the fact is that this hero happens to be a man of color who stopped another man of color from further harming or killing a white cop; thereby reminding us that black lives matter, blue lives matter, and indeed all life matters. We at your Sheriff’s Office remain proud to serve and focused on the mission.

Another video is available here.

Here is a video from the day of the original attack.

Other recent stories since May 2015 of permit holders saving the lives of police officers are available here.