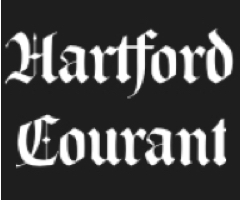 In the Hartford Courant: “Guns Only For The Rich In Connecticut”

Dr. John Lott has a piece in the Hartford Courant on Connecticut Governor Malloy’s push to raise the state’s concealed handgun permit fee from $140 to $370.

Why do Democrats, self-proclaimed champions of the poor, make it so difficult for poor people to defend themselves? Democrats oppose even free voter IDs as imposing too much of a burden on the poor, but when it comes to guns, they don’t hesitate to impose fees, expensive training requirements and onerous background checks. These are precisely the things that can put guns out of reach for poor people.

The proposed initial fee would be roughly 50 percent higher than California’s concealed-carry fee, which is currently the highest among states.

There are very serious consequences to raising these fees. Many law-abiding citizens, particularly minorities in crime-ridden cities, really need guns for self-defense.

We can’t simply blame inadequate policing. The cops can’t be everywhere at once. Indeed, they almost always respond to a scene after the crime has been committed. So the only solution is to let people protect themselves. If a criminal does attack, having a gun provides the safest course of action.

But Connecticut Democrats seem to think that the poor should be satisfied with dialing 911 and hoping for the best.

In 2013, all but two Democrats in the Colorado House of Representatives voted against a Republican amendment to exempt people below the poverty level from the state’s new tax on private transfers of guns. Since Democrats are normally eager to support exemptions for lower-income people, it appears to be a case of not trusting poor people with guns.

Democrats have also been behind efforts to ban the production of inexpensive handguns. These guns tend to be smaller and lighter, making them convenient for concealed carry. Though the preferred weapons of some criminals, they are also favored by many permit holders, especially ones on a tight budget.

There are still further obstacles if you want to get a concealed-carry permit. The result is that only the affluent can defend themselves. Democrats must surely realize this.

Higher fees clearly reduce the number of concealed-handgun permits. Texas has more than twice the population of Pennsylvania, but it has slightly fewer residents with concealed-handgun permits (1.15 million in Texas versus 1.27 million in Pennsylvania). It’s not because Texans don’t like guns — it is simply that they have a more difficult time getting permits. The fee for a five-year permit is $140 in Texas, but only $20 in Pennsylvania.

Gov. Malloy claims that the increased fees will help offset the state’s $3.6 billion deficit over the next two fiscal years. But you can’t have a 164 percent increase in permit fees and assume that there will be no change in the number of people who want permits. Malloy reveals his economic ignorance when he claims that the fee will bring an additional $9 million to the state annually. . . .

As one comment noted, there are costs beyond what we have included in our op-ed. 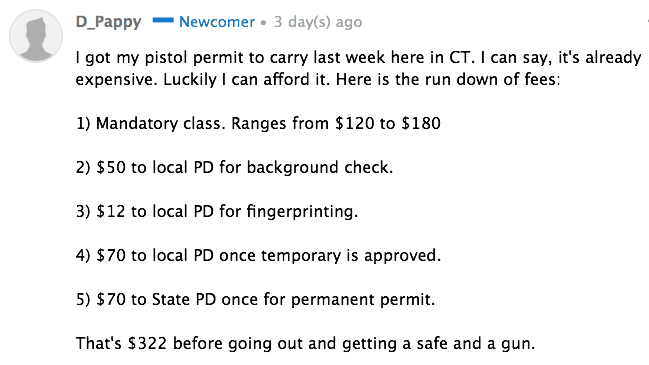 impact of gun control on the poor, op-ed