CPRC in the News: Sacramento Bee, Townhall, Breitbart, and many other places around the US 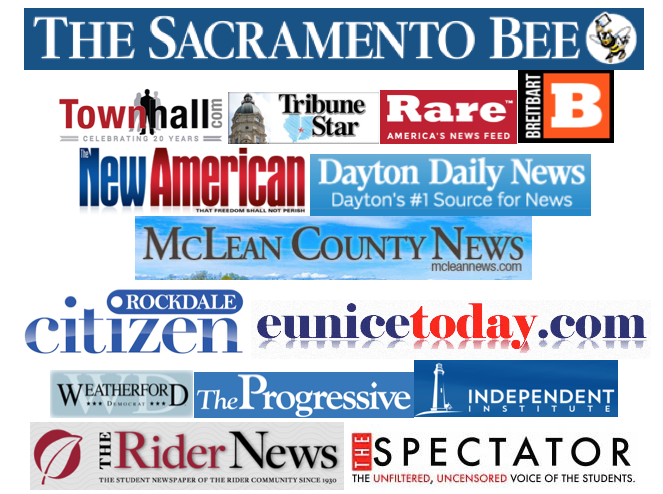 Wisconsin reached a major milestone this week: 300,000 of its residents are licensed to carry a concealed firearm. That’s eight percent of the state’s population. . . .

The Crime Prevention Research Center also issued a report saying that more people obtaining carry permits has decreased murder rates. Regardless, more Americans are carrying concealed firearms. Concerning women obtaining permits, that figure is up 270 percent since 2007. There is nothing “alarming” about Americans exercising their civil rights, especially one of our oldest ones. . . .

The number of concealed carry licenses issued in the U.S. — a 15.4 percent hike in one year, according to a study by the Crime Prevention Research Center in July 2015.

John Lott, a vocal Second Amendment advocate who runs the Crime Prevention Research Center, appears to have the best numbers on CHL ownership. The Center’s July 2015 study, “Concealed Carry Permit Holders Across the United States,” says there were more than 12.8 million CHL holders in 2015, up from 4.86 million in 2007.

The study also claims that 1.7 million permits were issued the previous year, a 15.4 percent increase. And since 2007, permits for women have increased by 270 percent, compared to a 156 percent increase for men.

Of course, a lot of the CHLs are issued in very red states that will vote Republican anyway, but a number of swing states have some of the most CHLs.

For example, just over 10 percent of blue-leaning Pennsylvania’s adult population has a concealed carry permit, placing the Keystone State fourth on the list of states with the highest CHL penetration. . . .

Also no doubt annoying to the Times is the simple fact that as gun ownership has increased, violent crime has declined. John Lott made waves with the publication of More Guns, Less Crime in 1998, based on a county-by-county study of the impact that 13 different types of gun controls had on crime. He revised it in 2000 and then again in 2010, each time making the increasingly persuasive case that as gun ownership expanded among American citizens, violent crime dropped. . . .

Despite a lack of consensus regarding the cause of the knife attacks, several hypotheses have been put forward. In an interview, John Lott, the president of the Crime Prevention Center claimed, commented on the string of stabbings in subways. “It’s possible criminals just realized it was easier to commit crimes on the subways,” he said. “You may simply have a copycat effect.” . . .

According to a 2014 report from the Crime Prevention Research Center, 3.89 percent of Louisiana citizens have a concealed carry permit. . . .

John Lott, a vocal Second Amendment advocate who runs the Crime Prevention Research Center, appears to have the best numbers on CHL ownership. The Center’s July 2015 study, “Concealed Carry Permit Holders Across the United States,” says there were more than 12.8 million CHL holders in 2015, up from 4.86 million in 2007.

The study also claims that 1.7 million permits were issued the previous year, a 15.4 percent increase. And since 2007, permits for women have increased by 270 percent, compared to a 156 percent increase for men.

Of course, a lot of the CHLs are issued in very red states that will vote Republican anyway, but a number of swing states have some of the most CHLs.

For example, just over 10 percent of blue-leaning Pennsylvania’s adult population has a concealed carry permit, placing the Keystone State fourth on the list of states with the highest CHL penetration.

Iowa, a purple state, comes in eighth with just over 9 percent. And Florida, a key state for presidential elections, ranks 12th, with 8.5 percent.

And as you might guess, some of the bluest states have the least CHL penetration: Illinois, Rhode Island, Maryland, California, New York, Hawaii, New Jersey, and Washington, D.C. all have about 1 percent or less . .

In the late 1990s, economist John Lott wrote an influential book called “More Guns, Less Crime” that examined gun ownership and crime data throughout the United States and concluded that states where concealed carry was common experienced lower crime rates and no increase in accidental deaths..

A good way to answer that is to look at how many have already gone to the trouble — and the answer is, not many. The Crime Prevention Research Center reports that only 8 percent of Georgia adults possess a concealed-carry permit, and I suspect the numbers are much lower for college students.

Still, professors worry about their campuses turning into the Wild West. They fear that a student who receives a bad grade, and who happens to be legally packing, will whip out his gun and start spraying bullets. Some faculty members have even suggested that they might have to change the way they teach in response to this new “danger.”

That, too, seems like an overreaction. Generally speaking, concealed-carry permit holders are among our most responsible and stable citizens. A website run by the anti-gun group Violence Policy Center reports just 29 cases since 2007 in which a permit holder committed a “mass shooting” — despite the fact that there are over 11 million permit holders in this country.

Statistically, the vast majority of such crimes are perpetrated by non-permit-holders. Licensed carriers are far more likely to thwart or deter an attack than initiate one. . . .

Much speculation has gone on concerning the bill on whether concealed weapons should be carried on a college campus. As citizens of the United States, we have the right to bear arms.

States that implemented “shall-issue” concealed carry laws reduced murders by 8.5 percent, rapes by 5 percent, aggravated assaults by 7 percent, and robbery by 3 percent, according to a 2000 analysis of FBI crime data by economist and political commentator John R. Lott Jr., PhD. Some may argue that this number is outdated, but when dealing with firearms and statistical data, the difference isn’t very much.

A peer-reviewed study published in the Journal of Criminal Law and Criminology found that when a gun is drawn in self-defense, the criminal retreats 55.5 percent of the time. If a criminal retreats more than half of the time when confronted with another firearm, then that reduces the crime rate.

The full opinion piece can be read here

Indeed, many people respond to mass shootings like those in 2015 by buying and carrying weapons. According to the Crime Prevention Research Center, the number of concealed carry permits in the United States nearly tripled between 2007 and 2014, from 4.7 million to 12.8 million. On the day after Thanksgiving last November, more than 185,000 federal background checks were initiated, the highest number in the program’s seventeen-year history. . . .

The number of concealed-carry permits has increased since President Obama was elected in 2008 and murder rates have fallen, according to the Crime Prevention Research Center. The number of concealed handgun permits rose from 4.6 million to over 12.8 million, and murder rates have decreased from 5.6 killings per 100,000 people to 4.2, a 25 percent drop. In 2014 there was also more support for gun rights than gun control, according to a Pew Research poll, with 52 percent of Americans saying it is important to protect people’s Second Amendment rights, while 46 percent said it is more important to control gun ownership.

. . . Ten states allow residents to carry handguns without a permit, according to a 2015 report by the nonprofit Crime Prevention Research Center.

Among those that require permits, the number of concealed handgun permits issued rose from 4.6 million in 2007 to more than 12.8 million last year, according to the group.

Paul Helmke is convinced that he still can call himself a Republican and a gun-control advocate.

As the presidential primary unfolds with GOP candidates competing hard for the gun vote, Helmke said he’s witnessing a disappearance of Republican leaders willing to advocate what he calls “common sense” gun laws.

“Republicans used to realize there were things you could do that don’t impinge on Second Amendment rights that might make us safer,” he said. “Now, it seems all Republican candidates either go with the simplistic ‘I’m a strong supporter of the Second Amendment,’ or they’re pushing for more guns in more places. One means nothing, and the other just makes us less safe.”

Helmke, a three-term mayor of Fort Wayne, has been booed and worse — his Wikipedia profile gets routinely smeared — for such statements. Still, he carries on.

The event was hosted by the Junto club in Manhattan, which traces its roots to 1727 when founding father Benjamin Franklin brought together — according to the club — “intelligent people to discuss intellectual issues in a respectful manner.”

That sounds like the role that Helmke hoped to play when he served as CEO of the Brady Campaign to Prevent Gun Violence. . . .