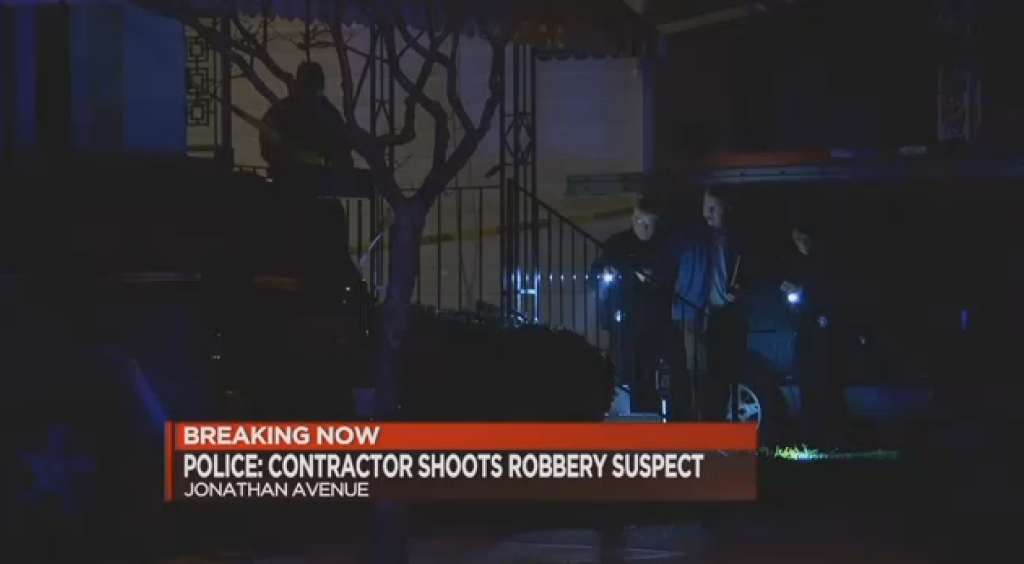 A Warner Robins man told police that he shot and killed a man who tried to rob him.

According to police, it happened around 8:10 p.m. on Christmas night on the 100 block of Oakridge Drive.

. . . Antonio Bagley, 29, told [police] Jerrell Walker tried to rob him so he fired his pistol at him. Walker later died from a gunshot wound to the torso.

Bagley has not been charged, and the case is still under investigation. . . .

A would-be thief was shot and killed by a Miramar restaurant employee during an armed robbery attempt Wednesday night, police said.

According to Rues, the suspect entered the eatery wearing a ski mask and gloves. The employee fired several shots, killing the suspect, Rues said.

At least one customer and other employees were in the restaurant at the time but no other injuries were reported. . . .

A northern Indiana man was killed and his girlfriend shot after trying to rob two Illinois men looking to buy a vehicle from a Craigslist ad, police said.

Brandon Johnson, 22, was shot several times about a block from his home in Gary, Indiana, after he pulled a gun on the would-be buyers and tried to rob them, officials said. He was pronounced dead at the scene.

The would-be car buyers — a 55-year-old man from Olympia Fields and a 65-year-old from Chicago Heights — called police around 7 p.m. Sunday to report a shooting on Gary’s west side. They told officers that they made arrangements to make a purchase from Craigslist, when the man and woman they planned to meet with tried to rob them . . . .

Bill Kessler was still shaken Wednesday after shooting a large dog that had hold of his beagle, Daisy.

“The big dog came charging at my dog, I thought he had her by the throat, but it turned out he had her shoulder,” the 65-year-old Port Huron man said.

Kessler was walking with Daisy on North Boulevard about 12:30 p.m. Tuesday when the attack occurred.

Kessler said he was on the sidewalk when the large dog charged.

“Before he got to me I got my pepper spray out and sprayed him but that didn’t stop him,” he said. “After the pepper spray the dog started attacking mine, I tried kicking it, but it was so aggressive I took out my gun and shot it.” . . .