CPRC Research in the News: Fox News, Washington Times, Hot Air, and others 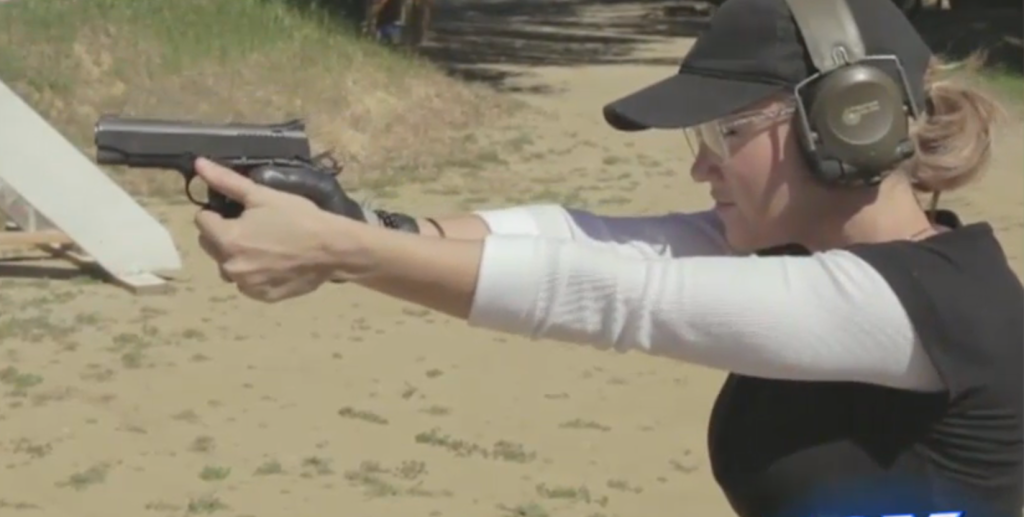 A report from a prominent economist finds that the number of permits to carry concealed handguns has skyrocketed by 178 percent in the last eight years, even as the murder rate has dropped.

The figures, cited in a study by the Philadelphia-based Crime Prevention Research Center, is evidence that legally-possessed handguns deter crime, rather than contribute to it, according to the center’s president, John Lott, an author and Fox News contributor who has held teaching and research positions at Stanford, University of Pennsylvania, Yale and the University of Chicago. He said the huge increase in the number of permits issued to allow law-abiding Americans to pack heat shows attitudes toward firearms are changing.

The study’s findings show that 5.2 percent of the total adult population in the U.S. have permits, and that in five states – Alabama, South Dakota, Indiana, Pennsylvania and Tennessee – more than 10 percent of eligible adults may carry concealed handgun permits. In the last year alone, the number of Americans licensed to carry concealed weapons has risen to 12.8 million, a one-year increase of 15.4 percent, according to Lott.  . . . 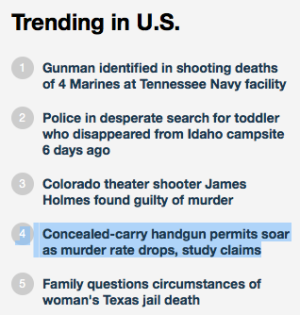 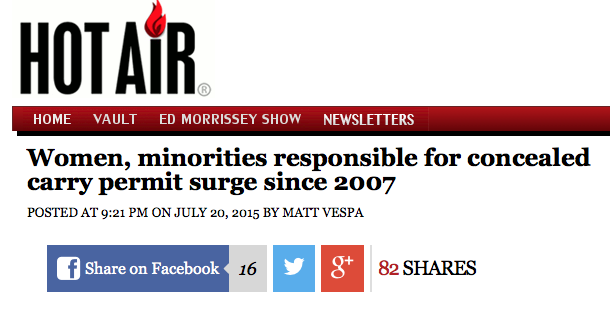 . . . The gun control flaws and failures come against the backdrop of more Americans choosing to arm themselves and dropping crime rates. A new study by the Crime Prevention Research Center (CPRC) reports, “the number of concealed handgun permits has soared, growing from 4.6 million in 2007 to over 12.8 million [in 2015].” The same report notes this 178 percent increase in concealed handgun permits has been accompanied by a 25 percent drop in the murder rate and a 25 percent drop in the overall violent crime rate during the same time period.

Here in Oregon, the number of concealed handgun licenses (CHL) is up and we have a low homicide rate. The CPRC reports there are now 211,223 Oregonians who have a CHL. That’s one in 14 adults in Oregon who can legally carry a concealed firearm — placing Oregon well within the top half of states with the most CHLs per adult. Yet we have what The Oregonian says is a homicide rate that is “around half the national rate.” Guns in the hands of law-abiding citizens are not the problem. . . .

A report released in July by the Crime Prevention Research Center, which was founded by gun rights advocate John Lott, determined that West Virginia ranks in the top 10 states, in terms of the percentage of population, with a concealed carry permit.

Dr. John R. Lott Jr., who runs the Crime Prevention Research Center (CPRC), today released yet another of the Center’s outstanding reports, entitled: “Concealed Carry Permit Holders Across the US”. (The full report is embedded at the bottom of this post.)

The report’s biggest takeaway was the continued acceleration of concealed carry licensing across the country. Those familiar with Dr. Lott’s seminal book “More Guns Less Crime” will not be surprised to learn that murder rates in the United States continue to plummet even as concealed carry continues to skyrocket: . . .

Murder rates across the country have fallen as the number of concealed carry permits have gone up since President Barack Obama took office in 2008.

According to a report by the Crime Prevention Research Center (CPRC),concealed handgun permits have increased from 4.6 million in 2007 to more than 12.8 million this year.

The number of concealed carry handgun permits has skyrocketed since President Obama was first elected, while murder rates have fallen, according to a new report released Wednesday.

Since 2007, the number of concealed handgun permits has soared from 4.6 million to over 12.8 million, and murder rates have fallen from 5.6 killings per 100,000 people to just 4.2, about a 25 percent drop, according to the report from the Crime Prevention Research Center.

And the number of permits issued is increasing faster every year. Over 1.7 million new permits were issued last year — a 15.4 percent increase over 2013, the largest such single-year jump ever, according to the report from the center led by President John R. Lott and research director John E. Whitley. . . .

Other coverage is available at PJ Media, The Federalist, and Breitbart News.

The study found that since 2007, the number of permittees in the United States has grown from 4.6 million to more than 12.8 million. The report found that 1.7 million new permits had been issued in the last year alone, an increase of 15.4 percent. The CPRC said that was the largest increase on record.

CPRC also said the true number of Americans who legally carry a firearm is likely higher than 12.8 million, since a number of states no longer require a permit to do so.

“Permits are not required in seven states (soon likely eight states) as well as virtually all of Idaho and Montana,” the report said. “Generally, people in those states only obtain permits so that they can carry concealed when traveling outside of their home state. With no fees or other requirements, these seven states undoubtedly can be assumed to be the ones where people most frequently legally carry concealed guns.”

The study also found that women are becoming a larger share of the gun carry community. . . .

. . . Carlson is hardly alone in discovering the life-changing aspects of self-defense. The Crime Prevention Research Center released a study today showing that the issuance of concealed-carry permits increased more than 15% in the past year. At the same time as permit issuance has soared, the murder rate has decreased, and permit holders tend to be much more law-abiding than even police officers overall. Be sure to read it all. . . .

. . . Coincidentally, there’s a new report due out today on concealed carry coming from the Crime Prevention Research Center. Washington State is tenth in the nation in terms of the greatest percentage of adults licensed to carry, which is no big surprise. The Evergreen State has consistently been in the top ten for many years and according to data from the Department of Licensing obtained and published by this column earlier in the month, there are now more than 493,000 active concealed pistol licenses in the state. More about this tomorrow. . . .