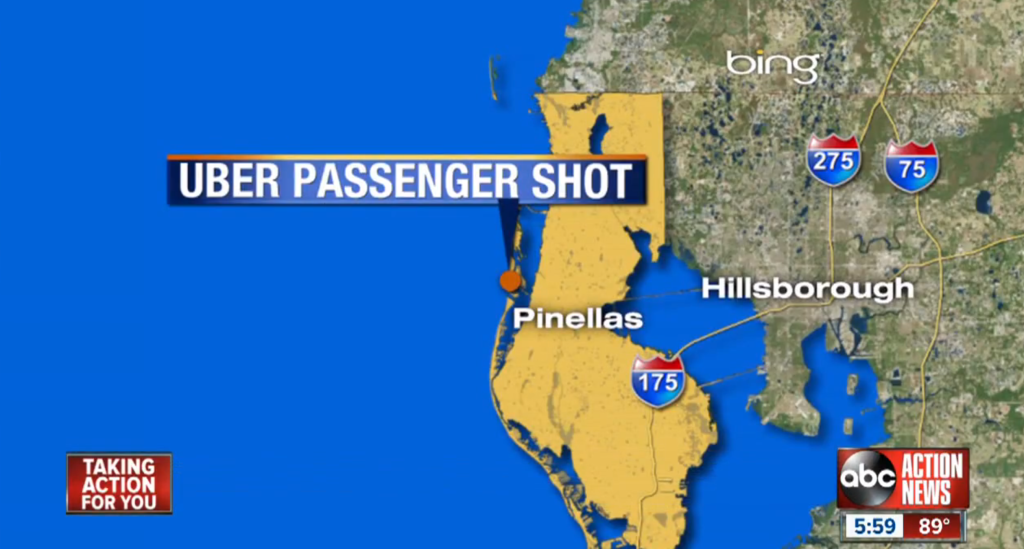 An Über driver, Steven Rayow, a retired New York City police officer, used his permitted concealed handgun to stop a passenger from strangling him.  Rayow shot the passenger in the foot when he thought that he was about to lose consciousness.  The case occurred in Clearwater Beach, Florida.  Uber just recently banned both drivers and passengers and from carrying guns.

From the Tampa Tribune:

Steven Rayow, 74, stopped his vehicle in the 400 block of Mandalay Avenue around 10 p.m. while working for the app-based driver service to pick up a passenger, according to a release from the Clearwater Police Department.

Rayow and passenger Marc Gregory Mermel, 60, began arguing and it turned physical, police said. Mermel choked Rayow, who pulled a gun from his waistband, police said. As the struggle continued, the gun went off and Mermel was hit in the foot, police said. . . .

“The fare gets in the car. There’s some type of verbal altercation first that then grows physical in nature. The driver tells us that the passenger then started choking him,” said Clearwater Police Department spokesman Rob Shaw.
Police said the driver, Steve Rayow, 74, afraid of losing consciousness, pulled a gun from his waist area. The two tussled and the gun went off accidentally. . . .
The passenger was treated at St. Joseph’s Hospital in Tampa for a gunshot wound to his foot. He tells me on the phone he’s shocked his Uber driver was carrying a weapon. Uber recently banned drivers from carrying guns. . . .

Being an Uber driver can be a risky occupation.  Last week another Uber driver in Pittsburgh was kidnapped and threatened with a knife.