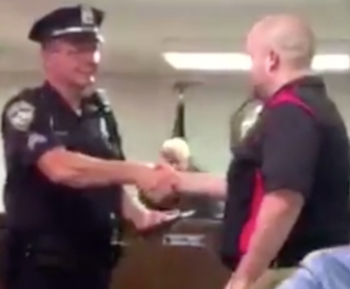 Wheeler said he was being attacked by a homeless man who later acknowledged to officers that he was high on crystal meth. Knocked to the ground and fighting to subdue the “very irritated and out of sorts” attacker, Wheeler ended up on his back with the man straddling him.

“I’ve never been in that situation before,” the 14-year department veteran told InsideEdition.com Wednesday. “I’ve always been able to take control of a situation.”

Earlier this week, Wheeler was able to reward Dylan DeBoard, the man who saved him, with the city’s Citizen’s Award of Valor. Every day, he remembers that day last year when things could have turned out far, far worse.

He often stops by DeBoard’s home, Wheeler said, just to say thanks. “Every time I see him I let him know how much I appreciate what he did.” . . .

The attack took place on June 10, 2015.  The video above mentions that DeBoard is a concealed handgun permit holder.

← CPRC on the Dana Show to discuss claims about defensive gun uses Yet more evidence that these killers are deterred by people with guns: Charleston, South Carolina Church Shooter →