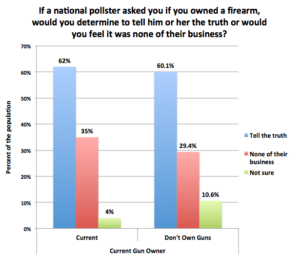 We have pointed out the conflicting polls on the percent of population owning guns, but there is a good reason to believe that these surveys have missed any increase in gun ownership because of an increasing distrust that Americans have in telling pollsters whether they own a gun.   A survey by Zogby Analytics shows that gun owners are almost 6 percentage points more likely than others to tell pollsters that it is none of their business that they own a gun (we had to combine the answers for former gun owners and never been a gun owner to get the total percentages for those who don’t own a gun).