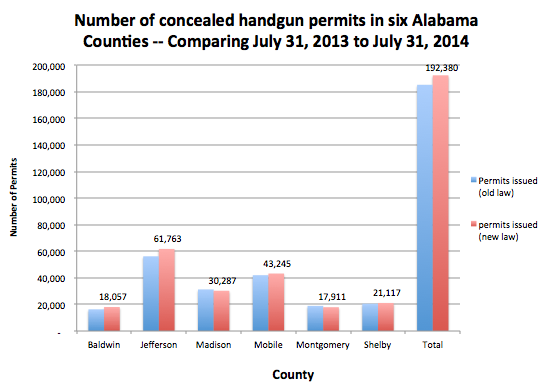 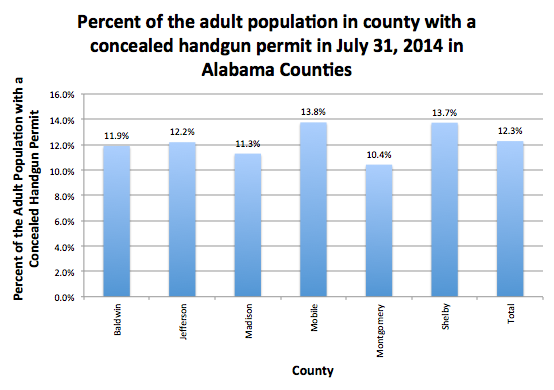 On August 1, 2013, Alabama moved from a discretionary concealed handgun permit rule to one where sheriffs had no discretion (copy of law is here). The number of permits in these six counties have increased by only 4 percent, much less than the increase that we are seeing in most of the US. It seems to imply that Alabama sheriffs rarely exercised this discretion.

These six counties account for 42.1 percent of the adult population in Alabama and have given out 192,380 permits. If the rest of the state gave out permits at the same rate, the total number of permits would be 459,980, up from 440,043 in 2013. This is clearly an underestimate since urban counties almost always have a lower permit rate than more rural areas and these six counties are the most urban parts of the state. These numbers for Alabama raises the total for just nine states currently to at least 5,644,153 (Florida, Indiana, Michigan Minnesota, Pennsylvania, Tennessee, Texas, Utah and now Alabama).

An article at Alabama Today summarized the experience over the last year.

Opponents who warned that looser restrictions on who can get a permit to carry a concealed pistol have been hard-pressed to point to examples of a “wild West,” but they contend the public would be safer if sheriffs had retained discretion.

Escambia County Sheriff Grover Smith, a former president of the Sheriffs’ Association who served as its point man during the debate over the pistol permit law, said sheriffs exercised their discretion judiciously – such as when an applicant had demonstrated violent tendencies or mental instability.

“There really never was an issue with denying pistol permits,” he said. “Most sheriff’s want you to be armed.” . . .

The new law that went into effect in 2013 made these changes:

1) Eliminate discretion in issuing permits.
2) Allowed permitted concealed handguns to be stored in people’s cars at work.
3) Allowed guns to be transported in a vehicle without a permit being required.
4) Clarifies open carry provisions and makes it clear that doing so is not disorderly conduct, allows private property owners, including businesses, to prohibit open carry.
5) Expands Alabama Castle Doctrine to include the use of deadly force to defend themselves from harm when an intruder enters his or her business.