UPDATE: John Lott’s newest Fox News piece is on this: Media bias on gun free zones. The piece goes through errors in discussions by the Wall Street Journal on this shooting. 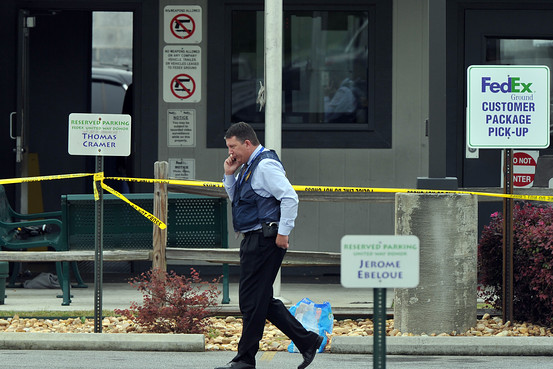 Picture from the Associated Press 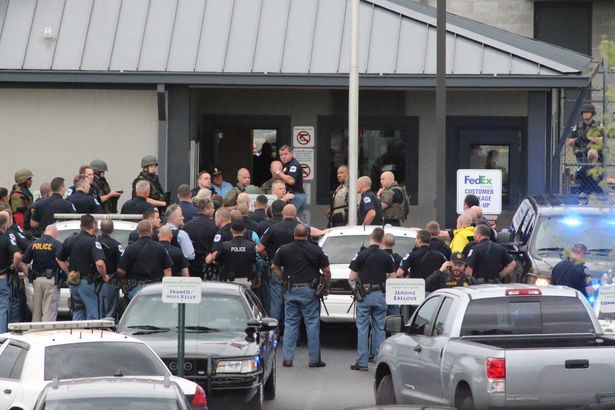 Picture from the Atlanta Journal-Constitution

When are news reports going to mention the simple fact that yet another attack has occurred in a gun-free zone? The above picture is from a facility for Fedex near Kennesaw, Georgia. Six people are listed as wounded from the attack.

Even with signs like the ones shown above no one in the media even mentions the simple fact that the attack occurred in a gun-free zone. Instead yesterday we had erroneous reports about an assault rifle being used (it turns out it was a shotgun). The easiest thing for reporters on the scene to report on is the one thing that the media just refuses to mention.

KENNESAW, Ga. – The father of a gunman who wounded six colleagues in an Atlanta-area rampage says his son didn’t seem enthusiastic about his job but never mentioned problems with co-workers.
Geddy Kramer showed up with a shotgun early Tuesday morning at the FedEx package-sorting center where he worked. He shot a security guard, then fired on those working in a large warehouse before killing himself. . . .

“Mark Hogan, vice president of security for FedEx, said the company believes an employer’s right to decide what is allowed on its property trumps an individual’s right to carry a firearm onto that property. He repeated a common theme expressed throughout the hearings, that allowing guns in parking lots adds volatility to possible confrontations. ‘FedEx should be allowed to continue to implement policies that are designed to protect our employees from irrational or heat-of-the-moment actions by their co-workers,’ he said. ‘Allowing employees to have near, immediate access to firearms, at work, creates an element of risk that is unacceptable.’”

Note that “Kennesaw is a city that has a law that requires its residents to own firearms – and this shooting still took place.” This is a city were guns are all over the place, but the killer goes to one place where the guns are not allowed.

The one exception that we have found where a media outlet has mentioned that the attack occurred in a gun-free zone was an update tag that the Atlanta Journal-Constitution added to the very end of a web post on April 29th. Click on screenshot to see how they covered it.

On the other hand, a WSJ article by Tim Noah concluded that the attack shows gun ownership doesn’t help stop these attacks.

There’s a sad twist to the shooting Tuesday morning at a FedEx facility in Kennesaw, Ga., where an employee injured six co-workers before turning the gun on himself. Kennesaw is one of several U.S. cities and towns that have an ordinance requiring every household to own a gun. . . .

← CPRC at National Review: "Bogus Gun-Control Numbers: To prove that concealed handguns are dangerous, the Violence Policy Center cooks the books" Who commits murder?: Not who you think →