John Lott’s op-ed on the shooting at Fox News starts this way:

The Obama administration hasn’t learned anything from the massacres at Fort Hood in 2009 or the Washington Navy Yard last year.

For all my research on how to stop or prevent mass public shootings and all the victims at these attacks that I have talked to over the years, the attack this week at Fort Hood was different.

My son Ryan, who is stationed at Fort Hood and recently back from a tour in Afghanistan, was just two blocks from the attack and could hear the shots.

However, as was true in the 2009 attack at Fort Hood by Major Nidal Malik Hasan, soldiers, like my son, are banned from having weapons on base unless they have “a credible and specific threat against [military] personnel [exists] in that region.”

Yes, there are military police and they guard the entrances, but, like police generally, they can’t be everywhere all the time. . . . . 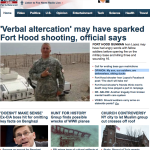 Something else from Fox News:

MARTHA MACCALLUM, GUEST HOST: One of the first questions to come up after this shooting is why were none of these victims armed? John Lott is a FoxNews.com columnist. His son was at Fort Hood yesterday. Lott asks why his son can carry a concealed handgun whenever he is off the base from Fort Hood and can protect himself and others. But on the base he and his fellow soldiers he says are defenseless. Why would that be?
Texas Republican Congressman Steve Stockman is behind a bill that he hopes will change that. Congressman, good evening. Good to have you here.
REP. STEVE STOCKMAN, R-TEXAS: Good evening.
MACCALLUM: You go so far as to say you believe that the extent of these shootings happens because these soldiers on this base are not allowed to be armed.
STOCKMAN: That’s absolutely right. In fact, this is a 20-year experiment that’s failed. This has only been in place 20 years. We’re not talking 50 or 100 years. This has only been 20 years. And since it’s been in place you see a rapid increase in this kind of violence on bases. And John Lott’s absolutely right. As he walks off the base, he can carry a gun.
MACCALLUM: Yes. I mean, it is extraordinary in many ways when you think about it. And in fact, after the original Fort Hood massacre the restrictions were tightened on this base, correct?
STOCKMAN: Yes, this is a bizarre response. I know there are some generals that are saying hey, we shouldn’t still allow them to protect themselves, but these are young men and women we say we want them to protect us. And it only makes sense if we’re trusting them to protect us — we should trust them to protect themselves. And this is a notion that we need to give them the right to protect themselves. It’s a crazy notion that we train them and then we don’t allow them to — to say you can’t have a gun. It doesn’t make sense.
MACCALLUM: Yes. I mean, the fact of the matter is, when you look at all of these mass shootings there’s one thing that ultimately ends the violence, and it is when that person generally is confronted with a gun. And that’s what happened here. A brave military police officer on that base, a woman, stepped in and stopped it, right? . . .

From the Christian Science Monitor:

“Good soldiers obey the rules against carrying guns,” writes John Lott, author of “More Guns, Less Crime,” whose son is a Fort Hood soldier. “But instead of making places safer, disarming them leaves them sitting ducks while those who want to do harm seek out venues where they don’t have to worry about victims defending themselves. With just two exceptions, every public mass shooting in the USA since at least 1950 has taken place where citizens are banned from carrying guns.” . . .

National Public Radio has this discussion:

For John Lott, Wednesday’s mass shooting at Fort Hood was a test of personal beliefs that struck uncomfortably close to home.

His son is serving at Fort Hood and was close enough to the activity to hear shots and screaming.

But he wasn’t in a position to respond. Department of Defense policy forbids soldiers and sailors, in most circumstances, from carrying weapons at installations.

That frustrates Lott. For years, he has been promoting the idea — including in his book More Guns, Less Crime — that relaxing gun restrictions would make for a safer society.

“Even though my son just got back from a tour of duty in Afghanistan, where he had his gun with him all the time, he isn’t able to have his gun with him on the base,” Lott says. “We somehow don’t trust people to carry a gun on base here.”

Lott is not alone in this debate. With the third mass shooting at a military facility in five years, some members of Congress want to re-examine the policies that leave soldiers unarmed on base. . . .

“The problem is you have these good, rule-abiding soldiers, but in this case, the killer knows everyone else is following the rules,” Lott says. . . .

The Los Angeles Times has this discussion:

John R. Lott Jr., president of the Crime Prevention Research Center and author of “More Guns, Less Crime,” said the policy was proposed in the waning days of the George H.W. Bush administration in the belief that banning personal weapons from military bases would “create a more professional business-like environment.’’

He and another expert said it was formally implemented after President Clinton took office. . . .

The Week had this:

But the troops would have had a fighting chance if they’d been allowed to carry weapons on base, said John Lott in FoxNews.com. Current Pentagon policy states that the only people allowed to be armed on U.S. bases are military police officers. But mass shooters always “seek out venues where they don’t have to worry about victims defending themselves,” which means thousands of troops serving here in the U.S. are little more than “sitting ducks.” With more than 11 million citizens legally allowed to carry concealed weapons today, why can’t our soldiers?