Fewer than 1 percent of state prison inmates obtained their guns at the time of offense from gun shows, costs of regulations exceed benefits 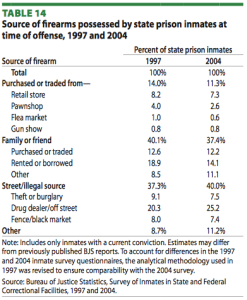 What is interesting is the remarkable consistency of the rate that criminals obtained their guns from gun shows (a copy of the earlier report is available here).

One problem with using these surveys is that people think that if one were to actually stop all criminals from obtaining guns from gun shows or through some other way, that will actually stop the criminals from getting guns. Yet, even when there are complete bans on guns criminals are still able to obtain them. Given how much of violent crime is drug gang related and given how hard it is to stop drug gangs from getting illegal drugs to sell, it is just as difficult to stop these drug gangs from getting the guns that they need to protect their very valuable drugs. Thus, it isn’t too surprising that background checks on private transfers has beneficial no impact on crime rates (see here or here).

Gun show regulations do have a cost. Almost everyone all those stopped by background checks are false positives — a law-abiding citizen who shouldn’t have been stopped. Other delays extend beyond the length of the gun show — the delays can usually take up to three business days to clear and gun shows only last for two days over a weekend. So even if you buy a gun at the very beginning of a gun show (say Saturday morning), the federal government has until Tuesday morning before a seller is allowed to complete the sale, but by that time the people who have traveled all the way to the show are long gone. For 2002 to 2006, 92 percent of checks were completed during the initial call by the dealer. About 3 percent of background checks take up to two hours to complete. Another 2 percent take up to 3 business days and 3 percent take 3 full business days. Even a two hour delay can mean the difference between whether the a sales occurs. After all, the next stage of the background check won’t begin until the first business day, which will be after the gun show has packed up and left. That implies that if you try waiting in hopes that the delay will only take two hours, there is a 63 percent chance that you will wait the 2 hours and still not be able to get the gun.

Forcing the gun dealer to wait on the telephone for up to a couple of hours means that the dealer can’t be making other gun sales.

A third problem is that there apparently more breakdowns occurring in the computer background check system. When the system breaks down no sales can be completed. Under the Clinton administration, the system was down for about 6 days each month. That problem essentially disappeared during the Bush administration, but it appears to be back under Obama, though the administration no longer keeps detailed data on how long these delays are.

One consequence of these delays is that gun show background checks on private sales are associated with about a 20 percent drop in the number of gun shows.