A short video of the debate from News Channel 12 is available here:


More on the debate is available from the East Carolina University school newspaper. Amazingly, the debate received news coverage at least as far away as Montana.
From WSLS TV:

East Carolina University hosted a debate on the controversial issues of guns and gun control.

“You know all of us have the potential to make a mistake: get drunk, go crazy, get angry, and when you make a mistake and you have a gun; something’s going to happen,” said Helmke.

Helmke tried relating to students in order to sway their opinions on the open discussion.

Passionate opinions on both sides of the debate flared when Helmke criticized opponent’s statistics.

“If you look at all the mass shootings with just two exceptions, they keep occurring where guns are banned,” said John Lott Jr. . . . 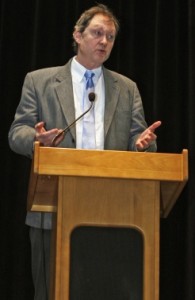