The newest piece at Fox News starts this way:

January is National Stalking Awareness Month and this week’s announcement by Civitas Media, that it was constructing a national database of concealed handgun permit holders, couldn’t have come at a worse time.

This is quite a service Civitas will provide stalkers with. Before a stalker decides to go after his or her intended victim, they need only look up whether the victim can defend themselves. Civitas has nearly 100 publications in 11 states and a circulation of 1.6 million.

One of the main benefits of concealed carry is that criminals don’t know until they attack whether a victim is able to defend herself. Thus, people who would never think of owning a gun, let alone carrying it with them, benefit from the fact that others are willing to do so.

One of the main benefits of concealed carry is that criminals don’t know until they attack whether a victim is able to defend herself.
Civitas’ database takes away that benefit.

Civitas might think they will embarrass gun owners by outing them, but making names public is a public safety issue. Even New York in its new draconian gun law last year included a clause banning newspapers from publishing the names and addresses of gun owners. . . .

UPDATE: Good news. Civitas Media has changed it mind on this database. (Click on picture to make it larger.) 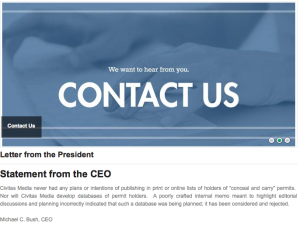