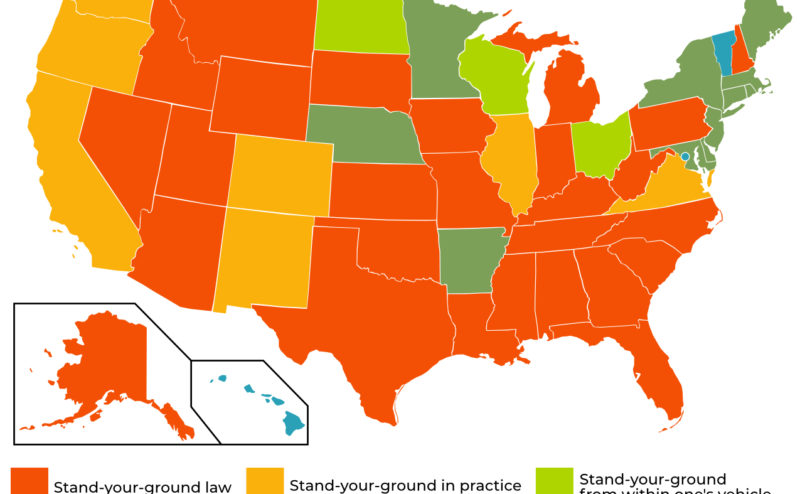 So are blacks discriminated against when relying on Stand Your Ground laws?

Here is a case that the liberal point to in arguing against Stand Your Ground laws.  To me, assuming that the facts are accurate, it certainly looks like Marissa behaved properly and I have stated that before in interviews.  From Salon.com:

On Aug. 1, 2010, Marissa Alexander, a 31-year-old mother of three, with a master’s degree and no criminal record, was working for a payroll software company in Jacksonville. She was estranged from her abusive husband, Rico Gray, and had a restraining order against him.Thinking he was not at home, she went to their former house to get some belongings. The two got into an argument. Alexander says that Gray threatened her and she feared for her life. Gray corroborates Alexander’s story: “I was in a rage. I called her a whore and bitch and … I told her … if I can’t have you, nobody going to have you,” he said, in a deposition. When Alexander retreated into the bathroom, Gray tried to break the door. She ran into the garage, but couldn’t leave because it was locked.  She came back, he said, with a registered gun, which she legally owned, and yelled at him to leave.  Gray recalls, “I told her … I ain’t going nowhere, and so I started walking toward her … I was cursing and all that … and she shot in the air.” Even Gray understands why Alexander fired the warning shot: “If my kids wouldn’t have been there, I probably would have put my hand on her. Probably hit her. I got five baby mommas and I put my hands on every last one of them, except for one … I honestly think she just didn’t want me to put my hands on her anymore so she did what she feel like she have to do to make sure she wouldn’t get hurt, you know. You know, she did what she had to do.” And Gray admits Alexander was acting in self-defense, intending to scare and stop but not harm him: “The gun was never actually pointed at me … The fact is, you know … she never been violent toward me. I was always the one starting it.” Ultimately nobody was hurt. Nobody died. On May 12, 2012, it took a jury 12 minutes to find Alexander guilty of aggravated assault. She was sentenced to 20 years in prison. . . .

The Daily Caller aggregated the Tampa Bay Times numbers a little differently and came to this (see also here):

But approximately one third of Florida “Stand Your Ground” claims in fatal cases have been made by black defendants, and they have used the defense successfully 55 percent of the time, at the same rate as the population at large and at a higher rate than white defendants, according to a Daily Caller analysis of a database maintained by the Tampa Bay Times. Additionally, the majority of victims in Florida “Stand Your Ground” cases have been white. . . .

So I looked at the data and I think that the Daily Caller made a mistake.  At least for decided cases, 69 percent of blacks who have claimed the Stand Your Ground law as a justification was not convicted (24 out of 35) (so 31 percent were convicted).

For whites, the percentage is actually lower.  62 percent of whites who claimed Stand Your Ground as justifying their actions were not convicted (40 out of 65).

For Hispanics, 78 percent successfully rely on the Stand Your Ground law (7 out 9 cases).

There are other ways to break things down.

Yet, just accounting for race doesn’t account for other important factors, such as the facts of the cases.  There is a lot of information in the files and some more careful empirical work would be useful.

Additional information: The Urban Institute also has a report on justifiable homicides (it received a lot of publicity such as here), but the problem is that it assumes that there is a consistent measure by the FBI of justifiable homicides.  In fact, nothing could be further from the truth.  Heavily Democratic and minority areas are less likely to record this data.  So let’s assume that blacks are more likely to use guns defensively in areas where there are more likely to be in heavily Democratic and black areas.  If so, you will get a lot of defensive gun uses by blacks that won’t be recorded as such because those jurisdictions simply don’t record the data.

At Townhall.com: Arkansas State Senator Is Wrong About Stand Your Ground Legislation. Here’s Why.

In the Minneapolis Star-Tribune: ‘Stand Your Ground’ laws: The facts don’t support fears of armed citizens