John Lott discussed a recent Supreme Court decision and the issue of Open Carry with Steve Gruber Tuesday, June 9th, 6:35 to 6:45 AM.

Carol Browne, 39, had a restraining order against her ex-boyfriend and had put in a security system as well as cameras all around the outside of her house.  But those obviously had no effect on stopping her ex-boyfriend from stabbing her to death late this last Wednesday night.  Restraining orders work on after someone has broken them.  …

The robbery and shooting took place at 10:30 PM on Friday night just as the couple was leaving the Shell’s restaurant at 2101 East Fowler Avenue.  Without for the permit carrier’s fast actions, From Tampa Bay, Florida (CBS-TV Channel 10 News):

. . . According to Tampa Police Department, the two suspects approached the victims with a gun drawn while the victims were leaving the Shells restaurant.

John Lott talked to Jim Bohannon on Thursday, June 4th during the 11 PM hour.  Jim’s radio show has long been the fifth most popular talk radio show in the country.  From Bohannon’s website:

The trial of James Holmes, the man accused of shooting up a theater in Aurora, CO, heard the defendant speak in his own words this week about how his killing of 12 strangers and wounding of 70 others was to increase his self-worth.

John Lott was interviewed on the Michigan Talk Network to discussion Texas’ new Open Carry and Campus Carry Laws. While Lott doesn’t think that Open Carry will make a major improvement in safety, he was much more optimistic about the impact of the new campus carry law (the interview was on Tuesday, June 2, 2015 from 6:33 to 6:52 AM).… 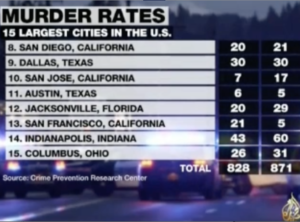 CPRC at Fox News: Texas about to role back 145-year ban on Open Carrying Guns

Some 850,000 Texans already have permits to carry cooncealed weapons, according to said John Lott, president of the pro-Second Amerndment Crime Prevention Research Center, and a Fox News contributor. Since licensed gun owners commit firearms violations at a very low rate, Lott said, simply allowing them to carry guns openly will not create any new dangers for law-abiding citizens.

UPDATE: Governor Abbott explains why he will sign the Campus Carry bill that passed the state legislature. These remarks were made on the Mark Davis Show on KSKY-AM.

Original Post:
John Lott’s newest piece at Investor’s Business Daily is part of a debate on this question with Bloomberg’s Frank Wilkinson (his piece is available here).  …

Watch the latest video at video.foxnews.com

Here is also a transcript of Gutfeld’s remarks.  One will note that Greg Gutfeld’s points parallel the evidence that we had put together on Vince Vaughn’s comments.  John Lott also has a new op-ed at Fox News on the Vince Vaughn discussion:

Things are definitely changing when it comes to the gun debate in America.

Georgia County Sheriff: “in my opinion [concealed handgun permit holder] saved other lives in that store”

Often it is claimed that citizens who stop mass public shootings don’t get news coverage because they stop anyone from being killed.  But in this case two people were killed before the permit holder was able to stop the attack.

A customer who fired back at the suspect who killed two people in a Ga.