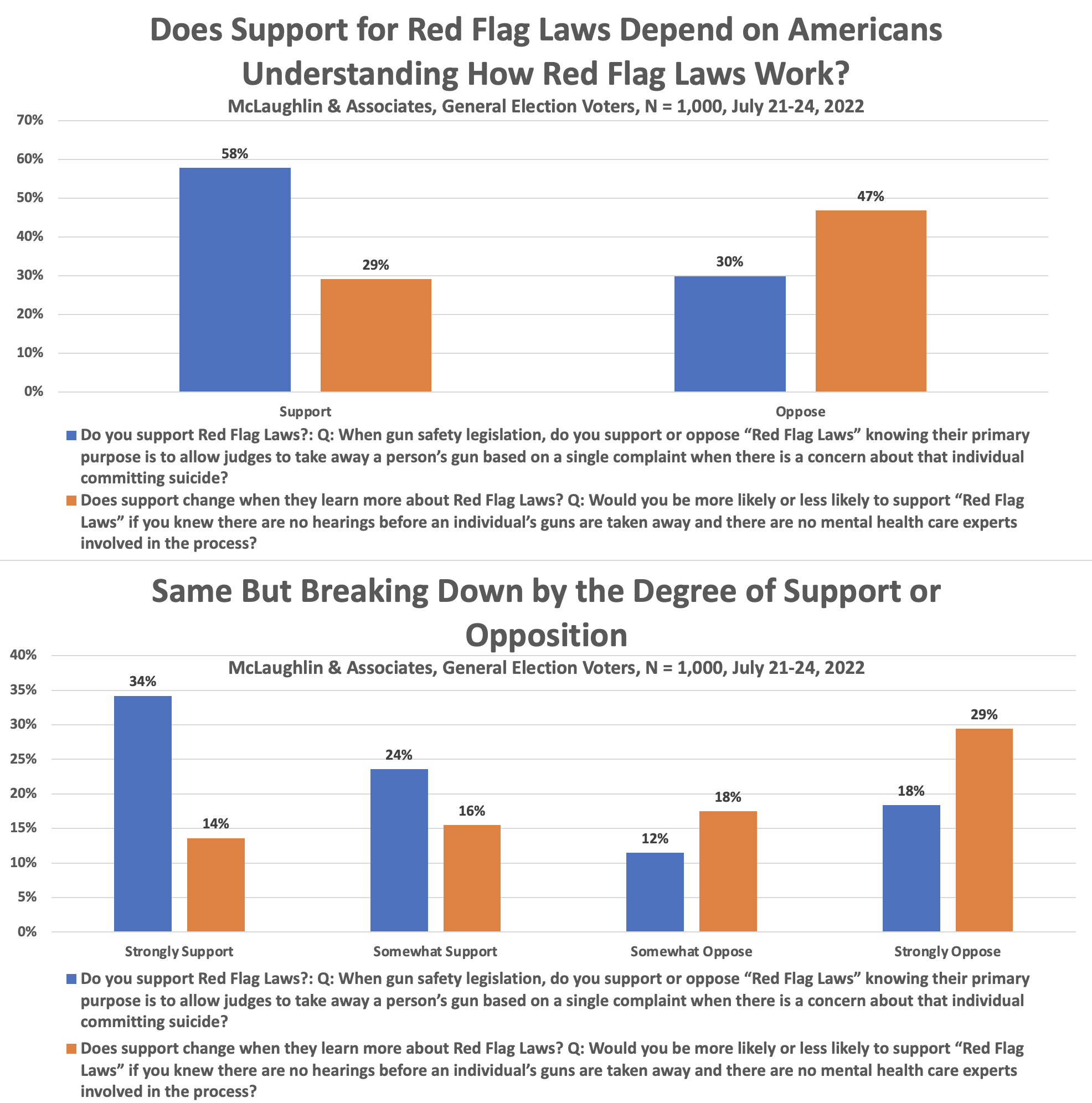 The Crime Prevention Research Center hired McLaughlin & Associates to survey Red Flag Laws for 1,000 general election voters from July 21st to 24th, 2022. The survey asked people whether they supported Red Flag Laws, then asked whether they still supported it when they were told that there are no hearings before an individual’s guns are taken away, and there are no mental health care experts involved in the process, and finally, if they prefer Involuntary Commitment or Red Flag laws.

While people initially say they support Red Flag Laws by a two-to-one margin (58%-to-29%), when they were told that there are no hearings before an individual’s guns are taken away and there are no mental health care experts involved in the process support changes to opposition (30%-to-47%). The biggest change is among those who most strongly support or oppose Red Flag Laws, with strong support plummeting from 34% to 14% and strong opposition rising from 18% to 29%. When then asked if they support Involuntary Commitment or Red Flag Laws, people support Involuntary Commitment by a 40%-to-33% margin.

Just as with a survey the CPRC did earlier this year with McLaughlin & Associates, it appears that those who support gun control laws are the least informed.

Those most strongly supporting Red Flag Laws are wealthy, Democrats, blacks and Hispanics, and those 18-to-29. Telling them that there are no hearings before an individual’s guns are taken away and there are no mental health care experts involved in the process had relatively little impact of the views of those in the upper middle class or the wealthy or those between 18-to-29. But, interestingly, the views of Democrats changed dramatically. While women and men started with very similar views, women’s views also changed much more than men’s.

Question 1: When considering legislation regarding gun safety, do you support or oppose “Red Flag Laws” knowing their primary purpose is to allow judges to take away a person’s gun based on a single complaint when there is a concern about that individual committing suicide

Question 2: Would you be more likely or less likely to support “Red Flag Laws” if you knew there are no hearings before an individual’s guns are taken away and there are no mental health care experts involved in the process?

Question 3: Over the last 25 years, half of the mass public shooters were seeing mental health care experts before their attacks, but in not one single case did these mental care professional identify the murderers as a danger to themselves or others. Involuntary commitment laws have people first evaluated by mental health care experts. If those experts believe that there is a concern, an emergency hearing takes place. If the person can’t afford a lawyer, one is provided. Judges have a range of options from outpatient mental health care, to taking away their weapons, to involuntary commitment. Knowing these facts, which type of regulation do you think would be more effective in reducing mass shootings?

← On the Leland Conway Radio Show: To discuss President Biden's latest comment about AR-15 and California Billboards On the Larry Connors USA Show about how New York state has responded to the Supreme Court Bruen decision →