Armed Civilians save two sheriff’s deputies who were shot in Bellingham, Washington 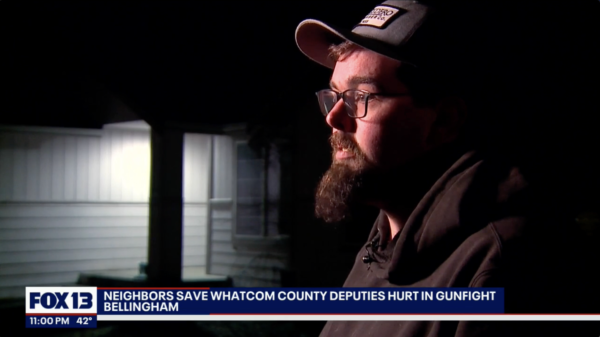 A dramatic case of a couple of civilians coming to the aid of two sheriff’s deputies:

The Good Samaritans described as protecting Whatcom County deputies during a gunfight, said they were fully prepared to injure the suspect in order to defend themselves, their families and the deputies.

Two Whatcom County Sheriff’s deputies were shot during a confrontation with Joel Young during a gunfire exchange in a residential neighborhood in Peaceful Valley on Thursday. Jesse Marshall and Cody Deeter live down the street from Young, who on Friday was charged with two counts of first-degree attempted murder and is being held on $5 million bail.

“He stepped out, with a gun, being a threat. I’m a veteran. I’ve been to combat. I know how to handle it, it’s not fun,” Marshall said.

He and Deeter were working on building a wooden bench on Thursday when they heard gunshots. . . .

← On The Vicki McKenna Show: Biden wants to ban all semi-auto guns, His creation of a National Gun Registry Arbitrary Social Media Censorship, again by YouTube →