Philadelphia Lyft driver with license to carry shoots brazen armed suspects during carjacking, “you would think every Lyft driver and Uber driver who doesn’t want to die on the job would have that as well” 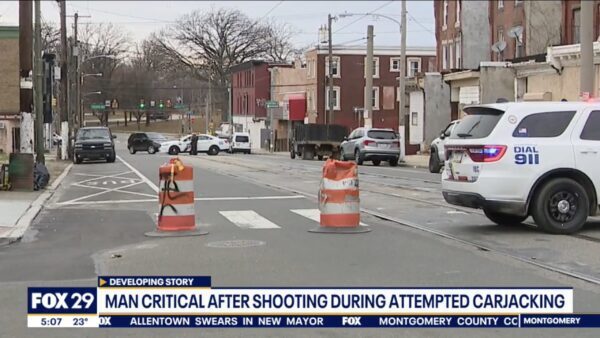 . . . .Police say the 38-year-old Lyft driver was rear-ended by another vehicle twice. As he got out of his car, police say one of the suspects – who was armed with a shotgun – got in the victim’s 2011 Infiniti. But as he drove off, the Lyft driver – who police say has a valid permit to carry – fired his gun at the carjacker. The second suspect tried to hit the Lyft driver with his vehicle, and the Lyft driver fired again.

The carjacker was located in the carjacking victim’s vehicle in the 4200 block of Parkside Avenue suffering a gunshot wound to the chest. He was taken to the hospital and was last reported to be in critical condition. The second suspect was located in the 4300 block of Lancaster Avenue in a Honda Accord with a gunshot wound to his right side. . . .

Quotes from the video from Philadelphia Fox 29:

Reporter Steve Keeley: [The Lyft driver] pulls his gun. He has a concealed carry permit because you would think every Lyft driver and Uber driver who doesn’t want to die on the job would have that as well.

Chief Inspector Scott Small: “a very dangerous situation, fortunately, our Lyft driver, our victim wasn’t shot, because he had a rifle put to him, and our Lyft driver had a weapon that he used and he shot both of the perpetrators.”

Reporter Steve Keeley: “So this case illustrates again why so many deliver drivers, food deliver drivers, pizza drivers, Uber and Lyft drivers are going to gun stores and getting legal guns because this is what is happening on a daily basis all around the country.”

← On OAN: Biden’s claim of “not knowing” other variants of COVID could arise is simply “not credible" On Armed American Radio: Why Gun Storage Laws Would Do More Harm Than Good & Gavin Newsom Threatens To Push More Gun Control In California Using SCOTUS Ruling On Texas Abortion Case →