Here are just a few of the clips from CBS’s Clarice and SWAT, ABC’s The Rookie, and NBC’s Law & Order Organized Crime from this year. The theme over and over again on these shows is that large numbers of police and FBI agents are racist. Entertainment television is all in on the claim of systemic racist law enforcement.

CBS’s Clarice claims that there is widespread discrimination against black FBI agents. CBS’s SWAT has a black officer talking about how he faces widespread disapproval from Los Angeles police officers and even some from within his own SWAT group for speaking out against clearly, vilely racist officers. They were originally alerted to these officers being racist because they arrested blacks at a greater rate than their share of the population, with the officers in SWAT saying that was clearly a bad sign. ABC’s The Rookie tells us that there are “hundreds” of racist police in the Los Angeles Police Department. That they cunning and know how just to go right up to the line, which makes it extremely hard to discipline them or remove them from the police force. The actors on the show certainly believe these claims. “Unfortunately, it was extremely accurate,” The Rookie’s Titus Makin who plays Officer Jackson West tells TV Line in a recent interview. “Just the reality of it all, being in those scenes, in those moments and telling such unfortunately truthful stories.”

Finally, ABC’s Grey Anatomy has an episode that ran right before the jury started deliberating in the George Floyd murder trial. This is just part of the episode’s heavy emphasis on racist officers. This segment involves the fiancé of a doctor being pulled over by police simply because he is black. He was going slower than the speed limit because he is so afraid of police. His fiancé is extremely scared that this obviously law-abiding young black man is going to be harmed by the police. Part of the segment not shown is that the police tear apart his car, presumably looking for drugs, and they leave him alone on the side of the road with his belongings spread out over the road’s shoulder. Not shown is how the doctor had to go into surgery, but she was so distraught that the police might harm her fiancé that she had a very hard time concentrating on the operation.

Unfortunately, this theme isn’t just ubiquitous in entertainment television shows. In a study, the Crime Prevention Research Center found that when a white officer kills a suspect, the media usually mention the officer’s race. When the officer is black, news coverage rarely mentions that detail

And there’s evidence that blacks aren’t as scared or as fed up with the police as these shows indicate. A July 2017 Quinnipiac University poll in New York City found that blacks strongly support the cops in their neighborhoods — 62% approved compared to just 35% who disapproved. That approval rating was 11 percentage points higher than for the New York City Police Department as a whole. It makes sense that people only know their local cops, and rely on media reports to form impressions about other areas they are less familiar with. A 2020 Monmouth University poll found that 72% of both blacks and whites are satisfied with their local police.

There is other evidence. If blacks don’t trust the police, they presumably won’t turn to them as frequently as whites when a crime occurs. Yet, blacks report violent crime to police at a higher rate than either whites or Hispanics, even when controlling for income levels. Low- and middle-income blacks are about 11 percentage points more likely to report violent crimes to police.

Through extensive research, we found 2,699 police shootings across the nation from 2013-2015. That’s far more than the FBI found, since its data is limited to only 1,366 cases voluntarily provided by police departments. The FBI data has other shortcomings, too: It disproportionately includes cases from heavily minority areas, giving a misleading picture of the frequency at which blacks are shot.

Officers kill blacks at a higher rate than their share of the population: 25% of the suspects killed were black, 45% white, and 16% Hispanic. As for where the deaths are occurring, black suspects tend to die in heavily black larger cities with populations averaging over 600,000, while whites are killed in smaller cities with an average population of 250,000.

White suspects were slightly more likely to be holding a firearm than blacks (63% to 61%). Black and white suspects were both equally likely to be involved in violent crime when they lose their lives at an officer’s hands, though blacks who died were more likely to be involved in drug or property offenses. But police generally have more challenging jobs in cities where blacks are killed. The average city where blacks are killed had a 61% higher violent crime rate and 126% higher murder rate than where the average white was killed. 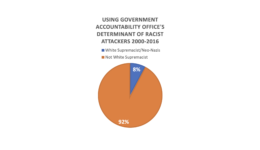 What Percent of Mass Public Shooters are White Supremacists?

UPDATE: The false narrative of white supremacists doing mass public shootings: Racial, Gender, Religious and Political views of these killers from 1998 through March 2021