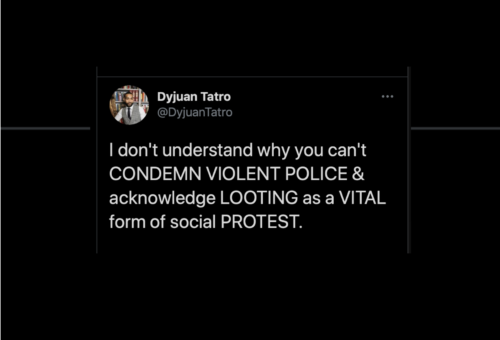 Ironically at the same time that Democrats in the House impeached Donald Trump for supposedly inciting the January 6th riot, the Democratic Congressional Campaign Committee hires as a Senior Advisor someone who last year lauded “Looting as a Vital form of social Protest” and condemned the police. The Tweet shown above is from Dyjuan Tatro at the end of last August. How is it possible that Trump asking people to “peacefully and patriotically, make your voices heard” is inciting violence, but these comments from a Senior Advisor for the Democrats is considered appropriate? He has also removed Tweets from his account where he referred to police on January 8th of this year as “white supremacists.” While Tatro has shot other gang members, another Tweet from just a few days ago is pushing for more gun control.

Interestingly, the mainstream news media sees no irony in this new appointment by the Democrats.

← On Kansas' KSAL Morning News w/Jeff Garretson: On the politicization of research and to figure out whether researchers are being honest with you On the Michigan Talk Network: Trump’s Senate Trial Rests On The Claim That He Lied About Vote Fraud, He Didn’t →