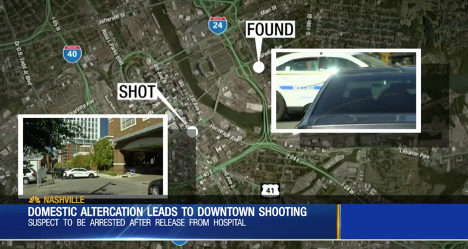 They say a 26-year-old man walked into the store just before 1 a.m. and tried to rob it.

Police say the 34-year-old employee pulled out a gun and fired at the attempted robber multiple times, hitting him.

Officials tell News 12 that the firearm the employee used was his licensed gun. The suspect was taken to St. Barnabas Hospital in critical but stable condition.

LeBrun said that Bua, in a white Hyundai, drove past the victim, in a black SUV, and cut him off near Magnolia Road. Both drivers then exited their vehicles to confront each other, which escalated into a physical altercation.

During the fight, the victim, a retired police officer, with a valid Nassau County pistol permit, fired one round from his firearm striking the other man in the buttocks.

Deputies are searching for a suspect accused of attempting to rob ‘The Little Fish House’ in Thomasville Wednesday morning. According to the Davidson County Sheriff’s Office, the suspect tried to enter the business and began shooting once denied entry.

The two barbers said that one of the men held them at gunpoint while the other took items from them and then took money from the cash register, according to a sheriff’s office incident report.

A barber said that one of the robbers patted him down, but didn’t feel the weapon the barber had secured in his waistband….

A barber told deputies that he fired multiple shots into a cream-colored Chrysler 300, the report said.

A woman will not face charges after a man was shot in the head during a shooting at a convenience store late Sunday night….

According to authorities, Latray Bell, the man who was with the person who got shot, held a gun and pointed it at one of the women and said she owed him money.

The woman refused to give Bell the money, so the pair got back into their vehicle and drove away, but fired shots as they left.

Officials said the man Bell was with was the only person that was hit. Authorities said the woman, who has a concealed weapons permit, defended herself by firing back.

Bell has been charged with assault with a deadly weapon for pointing the gun at the women. Police said because the woman was defending herself, she will not be charged.

The hotel clerk contacted police, saying he had shot a burglar. He reportedly told police that he was making his rounds in the parking lot when he saw 46-year-old John Paul Bays near a red van, and then heard glass breaking.

The clerk said he then confronted Bays, and believed he saw the man point a handgun at him. The clerk then pulled his own handgun and fired one shot at Bays. Police say Bays responded by saying, “Hey, you shot me,” before running to a nearby apartment complex.

The clerk chased after Bays, and saw him leave in a white car. He managed to get a license plate number for the vehicle and also found a drill Bays had allegedly stolen.

The man came inside the restaurant with the intent to rob the place, according to police.

Flood said Robert Harold Mattson, 26, charged a man and placed him in a chokehold during an altercation.

The victim shot Mattson in self-defense, and Mattson was taken to the hospital, Flood said.

A masked robber jumped the counter of a grocery store and pummeled an employee before the employee fired a gun and scared him away, police say….

The incident happened about noon Monday at the Food Plus store on East 123rd Street and Dove Avenue in the city’s Union-Miles neighborhood. Stuart strolled into the store wearing a brown mask and jumped over the counter, according to police reports and court records.

He punched the 38-year-old employee at least six times leaving him bloodied and on the ground, according to police.

The two fought over the employee’s gun. The employee wrested the gun away and fired a single shot, which scared Stuart, police reports say. Stuart ran out of the building as officers arrived.

A robbery plot ended with the alleged suspect wounded and in a hospital bed Monday afternoon….

The shooter stayed on the scene and told officers a man approached him and tried to rob him. In order to prevent the robbery, he told police pulled out his gun and shot the man.

A 26-year-old woman told police it all started when she got out of her car at 12:48 a.m. Sunday. She said one man pointed a gun at her while another man tried to take her purse off her shoulder, but she refused, which led to a struggle.

The woman started screaming, which caught the attention of a 48-year-old man in the neighborhood. He came over and confronted the men who were trying to rob the woman—and it worked. The men dropped her purse and ran toward a red car.

But while they were running away, one of the men fired shots at the man who came to help. He pulled out his own gun and returned fire.

Witnesses told police that two suspects entered the business and tried to rob it by holding the cashier at gunpoint. At some point, the cashier shot at the suspects and they ran away with an undetermined amount of cash and merchandise.

Mid-afternoon, a man tugged at the front door of the store, which is controlled by a security buzzer….

Moments later, four robbers masked with bandanas rushed the store and hammered away at the glass showcase.

What they didn’t know was that Hayes was watching from the office, behind a one-way mirror.

“They were smashing the cases, but they stopped as soon as I started shooting,” he said.

Surveillance video shows them entering, reaching into the jewelry case, and then running for their lives out the door.Mid-afternoon, a man tugged at the front door of the store, which is controlled by a security buzzer….

Moments later, four robbers masked with bandanas rushed the store and hammered away at the glass showcase.

What they didn’t know was that Hayes was watching from the office, behind a one-way mirror.

“They were smashing the cases, but they stopped as soon as I started shooting,” he said.

Surveillance video shows them entering, reaching into the jewelry case, and then running for their lives out the door.

Police said Macon confronted his ex-girlfriend as she was being dropped off at Martin’s, where she works. The investigation shows that D’Ante Johnson, 29, had driven his co-worker to work at 10:12 a.m. at the rear entrance. Macon drove up in his Jeep Compass and parked in front of Johnson’s car. Macon exited, walked up to the passenger side of Johnson’s car, and jerked his ex-girlfriend out and onto the pavement. Johnson told Macon to “take it easy.” Macon asked Johnson what he was going to do about it and lifted his shirt and displayed a pistol in his waistband. When Macon reached for his gun in a threatening manner, Johnson told police he pulled his own pistol from a holster and opened fire on Macon. Macon fled toward the entrance of the Hilton Garden Inn before getting into the Jeep and fleeing on Korean Veterans Boulevard to East Nashville where he was stopped by Metro officers at South Fifth Street and Sylvan Street. He was taken to Vanderbilt University Medical Center with non-life threatening wounds to his torso….

No charges were placed against Johnson, who is listed as the victim in the aggravated assault warrant against Macon.

Marnicus Collins contacted investigating officers to say he had shot a man who’d hit him in the face with a gun during a robbery attempt, according to court documents.

Collins reported that Cabebe had pointed a gun at him and ordered him to hand over all his possessions.

He said he was reaching into his coat pocket when Cabebe hit him on the face.

Collins, who had his own gun, then fired several rounds at his attacker, wounding him at least once.

Cabebe shot back one time but did not hit Collins, documents said.

Police say two masked men, armed with guns, came into the store to rob it.

Two employees were working at the time, and a 26-year-old clerk drew his gun and fired. The shot killed one of the suspects, according to WJW.

Officers say the second attempted robber ran from the scene.