Dr. John Lott has a new piece at the Wall Street Journal.

First on Mr. Biden’s list, however, is a proposal to make gun manufacturers civilly liable for misuse of guns they sell. This means people could sue manufacturers and sellers whenever a crime, accident or suicide occurs with a gun. The straightforward result would be to put gun makers out of business.Imagine what would happen to the car industry if similar rules applied. The National Safety Council estimates that 39,404 Americans died and 4.5 million were injured from car accidents in 2018. Cars are also used frequently to commit crimes.

Note that cases of product malfunction are already covered; to run afoul of Mr. Biden’s proposed rule, product makers need not do anything wrong at all. Car accidents often occur when a driver isn’t paying attention or drives recklessly, perhaps under the influence. It would be ludicrous to make car makers pay lost wages, medical costs and pain and suffering because of a driver’s negligence.

Guns aren’t so different. Less than 1% of guns are ever used in crimes, suicides or accidents, and when they are, it’s virtually always the result of the user’s actions. Many other products, such as motorcycles, have much higher probabilities of causing harm. The death rate per motorcycle is 0.05%; the date rate for guns is 0.008%. The latter includes murder, accidental deaths and suicides. Guns are also used defensively about two million times in the average year. Will government reward gun makers when their products are used to save lives?

My research finds increases in gun ownership are associated with drops in crime, not rises. Poor people in the areas with the highest crime rates benefit the most from owning guns, according to my studies. But gun-maker liability would be sure to make guns unaffordable for them. Police also believe gun ownership helps to combat crime: When PoliceOne surveyed its members in 2013, around 76% answered that legally armed citizens are very or extremely important in reducing crime.

If high-profile Democrats really believe that guns produce no benefits, they ought to ask their bodyguards to disarm. Instead, these politicians disarm vulnerable people.

Mr. Trump is right: Democrats want to ban guns. And if they win the Senate and abolish its filibuster, as they keep threatening, they could do it.

The type of lawsuits that existed before the 2005 Protection of Lawful Commerce in Arms Act is available here. 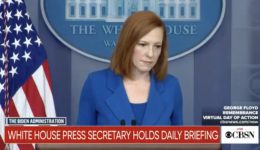 Question: “Is there a crime problem in this country?” WH Press Secretary : “Well, I would say certainly there is a gun problem.”