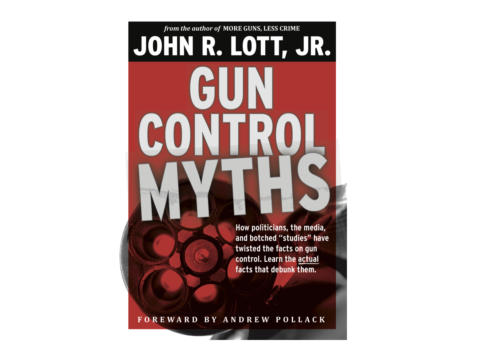 It is greatly appreciated that Doctors for Responsible Gun Ownership has put up a review of Lott’s new book, “Gun Control Myths: How politicians, the media, and botched ‘studies’ have twisted the facts on gun control.” A second reviews is also included below.

Doctor of Economics John Lott, Jr. is the expert on gun research because he’s done most of it. His Crime Prevention Research Center is the central repository of answers to all questions about the wrongness of gun control and how in truth guns save lives.  More Guns, Less Crime (his classic introduction) and his previous book The War on Guns are the perfect foundations for Gun Control Myths—together these form a compendium that addresses most of the fraudulent claims that have been made about how guns surely (but don’t) cause “gun violence”.

I know Dr. Lott, and believe me, he’s no Dan Quayle. He’s the real thing—an ultra-conscientious researcher who makes all his data public, willingly considers criticism, and addresses newly published research by others as well as conducting his own projects to add to our knowledge base. This behavior is exactly opposite to that of nearly all other gun-related researchers, who often for not-so-good reason obscure their data, use skewed analyses, and achieve their preferred results.

In Gun Control Myths he doesn’t attempt to cover every misleading idea about guns, but has chosen to address the biggest issues of today. He begins by correcting the errors of several of the seemingly comprehensive summaries in circulation about the dangers of gun ownership. He moves on to thorough discussions about mass shootings, which are so preoccupying although very rare and more often than the media reports, ended by good guys with guns.

There has been too much manipulative politicization for far too long about guns used badly by criminals and psychopaths. In addition to correcting media misreporting, Lott points out the FBI’s “political biases [and] corruption” beginning with the Obama administration that have not been fully rooted out. This reflects worry about many levels of government picking winners and users in how they interpret laws that blatantly infringe on citizens’ “right to keep and bear arms”.

Lott is admirable in accepting no organizational funding, which leaves the non-profit CRPC running on a shoestring compared to Bloomberg and blue state millions pouring into generating anti-gun studies every year. Thankfully, the excellence of CRPC’s work continues to win on quality if not quantity.

Do you value graphs and tables? There are scores and scores, from both sides of the “debate” as he shows there’s really none. How about footnotes? There are hundreds. Appendices? Six, over 17 pages and online. John Lott leaves no room for misunderstanding at any level of inquiry . . .

The rest of the review is available here.

Another review of the book from KR Training is available here.

Research John R. Lott, Jr. has a new book out, “Gun Control Myths”. Like all his other work, it’s fact-filled, with higher quality research than the Bloomberg-funded gun control advocates produce. Since Dr. Lott’s conclusions don’t fit the “narrative” of most media, you won’t see his results reported as widely. If you find yourself discussing gun control and gun laws with others during this election season, the material in this book may be useful to you. Lott does an excellent job of providing detailed endnotes for each chapter, referencing back to every article and study he mentions in the book. He exposes the ways that data are misrepresented and manipulated to create statistics widely believed by those that blindly agree with those claims due to confirmation bias, and/or ignorance of technical details about firearms and existing gun laws. . . .

I recommend this book, along with all of his previous publications, and encourage gun owners to support his research by purchasing his books. . . .