Mayor Pete Buttigieg’s false claims about his knowledge of guns 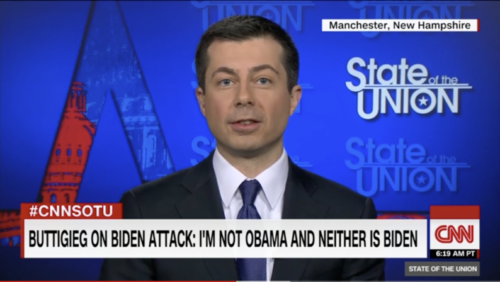 Pete Buttigieg has frequently called on his military training in making points on gun control. For example this is something that we wrote up after the Miami Democratic Presidential Debate in June last year.

No self-respecting military in the world uses semi-automatic weapons. South Bend, Indiana, Mayor Pete Buttigieg knows that, but he’d rather give people the impression that military weapons are pervasive. “As someone who trained on weapons of war, I can tell you that there are weapons that have absolutely no place in American cities or neighborhoods ever,” he said on Thursday night.

“I think the weapons of war can do no good in American neighborhoods,” Buttigieg, an Afghanistan War veteran, said on “New Day.” “I trained on weapons that are similar to these, and they have one purpose, which is to destroy as much as possible as quickly as possible. They have tactical uses in war zones. Since when are American cities and neighborhoods supposed to be war zones?”

The above clip is from Buttigieg speaking to a crowd in Des Moine, Iowa on Wednesday, April 17, 2019.

As someone who is very familiar with my military training with weapons of war, someone who carried a rifle and a pistol around a foreign land as a war was present, there are some weapons that just don’t belong in our neighborhoods in peace time in America.

But a new article in the Wall Street Journal indicates that he completely skipped being trained on “weapons of war” (emphasis added).

Mr. Buttigieg’s stint in the Navy isn’t as impressive as he makes it out to be. His 2019 memoir is called “Shortest Way Home,” an apt description of his military service. He entered the military through a little-used shortcut: direct commission in the reserves. The usual route to an officer’s commission includes four years at Annapolis or another military academy or months of intense training at Officer Candidate School. ROTC programs send prospective officers to far-flung summer training programs and require military drills during the academic year. Mr. Buttigieg skipped all that—no obstacle courses, no weapons training, no evaluation of his ability or willingness to lead. Paperwork, a health exam and a background check were all it took to make him a naval officer. . . .

Democratic candidates continually promise to ban semi-automatic rifles such as AR-15s, even though they function just like small-game hunting rifles. They fire the same small caliber bullets, and do so with the same velocity and rapidity (one bullet per pull of the trigger). Democrats may label it a “weapon of war,” but no self-respecting military in the world would use these semi-automatic rifles.