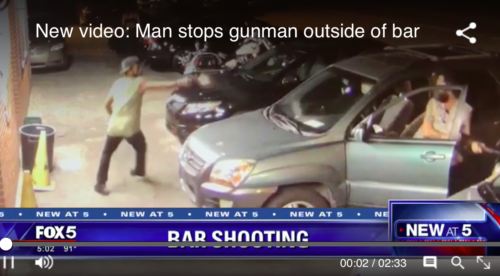 This is an amazing story that was caught on video. An employee who wasn’t even scheduled to work that day, but was simply hanging around the bar outside in the parking lot, stopped an attack that the police say would have likely resulted in multiple deaths. Note in the cover picture for this video that the bar has multiple gun free zone signs. From Fox 5 in Atlanta:

Deputies in Coweta County say an armed off-duty employee may have stopped a mass shooting at a crowded bar in Newnan Saturday morning.

FOX 5 News has the exclusive surveillance video of the shooting outside Fat Boys Bar and Grill on Highway 16. Deputies say that video shows Kevintez Mathewis on his way into the bar with a handgun when Ben McCoy confronts him and is shot multiple times. He drew the gunman’s attention and then drew his fire. . . .

From Channel 11 News in Atlanta:

McCoy heard the shots and grabbed his gun. Investigators reportedly said that Matthewis fired several rounds at McCoy. “He put his life on the line to try and protect the bar that he loves,” bar manager Emily McGhin said.  . .

← Media Bias on Guns: CBS' Elementary on not liking guns, how the mere presence of guns lead to violence, to the benefits of gun buybacks On Washington Times' Mack On Politics to discuss expanded background checks, Assault Weapons Bans, and Red Flag laws →